Domestic devices to be linked to Internet - Google vice-president 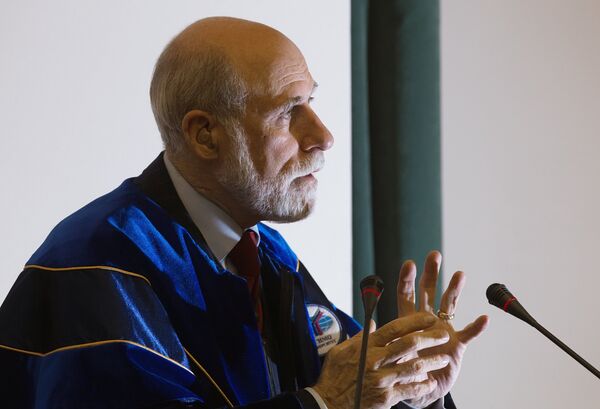 Advanced technology and the Internet have invaded our lives and everyday household devices will soon be controlled via the Internet, Vinton G. Cerf, vice president and Chief Internet Evangelist for Google told RIA Novosti.

Ways of communication via the Internet are becoming more and more accessible while at the same time more technically complicated, Cerf went on.

"Many of the older media will be transformed in part by their presence on the Internet," Cerf said. "Most of the devices we work with will be part of the Internet, even ovens and refrigerators that we have at home," he continued.

"The thing we think as a book could be a thing we could interact with because it is a part of the network and it is been presented to us through a programmable device," Cerf said. "So, now I can have a dialogue with a book, I can click on links and, maybe, talk to someone else about what I am reading or I can click on a link and go refer to material from another book."

Cerf said about 44% of Russians are online already, some with broadband access, with dsl, some with mobiles.

"I think that the young people especially seem to be very quick to take up and make use of this technology," he said. "You still have ways to go to be as fully penetrated as some of the other countries in the region. The Baltic countries, for example, are up in the 70% range."

"My impression is that President Medvedev is very determined to infuse this country with high technology and to link the universities, to get the schools on the network," Cerf said.

Google has recently been "fighting" with the Chinese government over its attempts to censor the company's search engines, resulting in Google partially exiting the Chinese market.

"I am sure that there will be countries that feel threatened by a free exchange of information," Cerf said.

"But I believe that people are very creative about being able to communicate with each other," he continued.

"If we were to go back into your Soviet period, you remember this samizdat that people were passing around to each other so they could communicate even if they were not supposed to do that," Cerf said.

"I think any attempt to somehow close down the Internet is going to be met with either resistance or clever ways of getting around that attempt. And I hope, that turns out to be the case because an exchange of information is so fundamental to a democratic society that it should be preserved."

Cerf is widely known as one of the "fathers of the Internet,' - along with Robert E. Kahn he created the TCP/IP protocols and designed the basic architecture of the Internet.

Cerf visited Moscow on Friday. During his stay he gave an open lecture at the Moscow State Institute for International Relations.