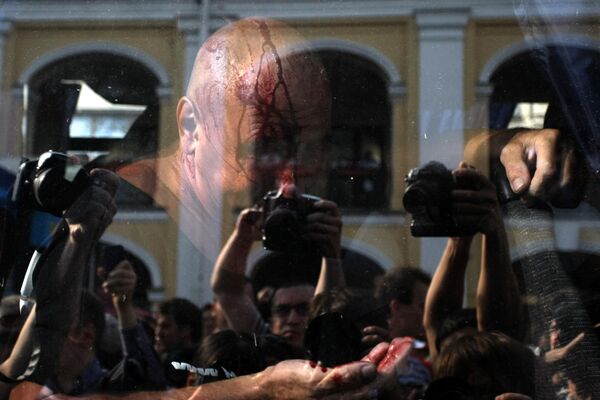 A police officer in Russia's second largest city, St. Petersburg, has been charged with excessive force after forcibly breaking up an opposition rally on July 31, a business daily said on Thursday.

A police officer in Russia's second largest city, St. Petersburg, has been charged with excessive force after forcibly breaking up an opposition rally on July 31, a business daily said on Thursday.

An amateur video that has gone viral on the Internet shows the officer beating demonstrators during a March of Dissent rally on downtown Nevsky Prospekt.

Russian opposition movements hold rallies on the last day of each month with 31 days in honor of Article 31 of the Russian Constitution, which guarantees freedom of assembly and the right to demonstrate. The rallies are always "unsanctioned" as the local authorities deny the opposition permission to hold the protests.

Kommersant newspaper reported that the officer, whose name is not known but is called "Pearly" on the Internet and in the media due to the pearl beads on his wrist, addressed the protesters with the words: "Hey ferrets, who wants some more?" - a salutation that was met with booing and cries of "Fascist!"

"All the necessary investigative actions to collect evidence on the crime are being carried out," St. Petersburg investigators said, adding that if found guilty, the officer could face up to 10 years in prison.

Opposition leaders, including the Other Russia leader Eduard Limonov, welcomed the statement but said similar scrutiny should be applied to police in Moscow and other Russian cities.

Police routinely break up unsanctioned opposition rallies across the country, but the July 31 crackdown in St. Petersburg was particularly heavy-handed, with dozens injured and hauled away in police buses.

In Moscow, the authorities have tried every trick to prevent the "31st-ers," as they style themselves, from gathering on their favored Triumfalnaya Square.

Blood donation drives have been held on the square, and most recently, on July 31, there was a display of sports cars. Some 200 protesters turned out regardless, with 75 hauled away in police buses.

The rallies peaked on May 31 when more than 1,000 people showed up after Prime Minister Vladimir Putin appeared to give some encouragement to protesters in an interview, but Moscow city authorities have now closed off the square with metal fencing to start construction of a multi-level underground car park.