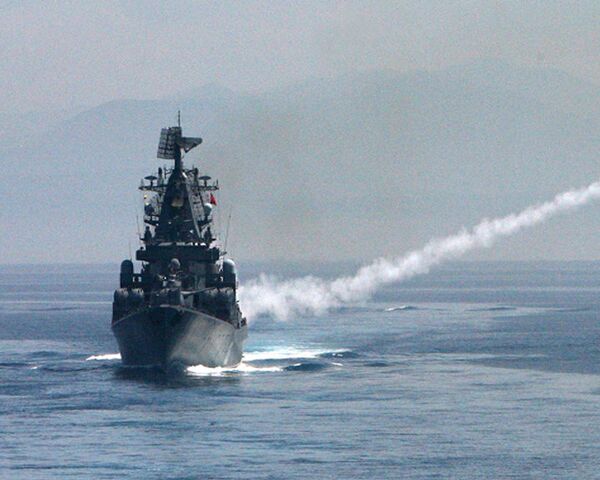 © TOF
Subscribe
Ahead of the scheduled Russian-Indian naval exercises, in which the heavy nuclear missile cruiser Pyotr Veliky will take part, Tatiana Shaumyan, director of the Center for Indian Studies at the Institute of Asian Studies, discusses the state of Russian-Indian relations and the prospects for defence cooperation between the two countries. Interview by Igor Chekunov.

Ahead of the scheduled Russian-Indian naval exercises, in which the heavy nuclear missile cruiser Pyotr Veliky will take part, Tatiana Shaumyan, director of the Center for Indian Studies at the Institute of Asian Studies, discusses the state of Russian-Indian relations and the prospects for defence cooperation between the two countries. Interview by Igor Chekunov.

Russia and India enjoy longstanding and close ties in many areas. How would you describe Russian-Indian relations on defence at present?

Defence cooperation is one of the most important and longstanding aspects of our relationship with India. This cooperation began in the 1960s, soon after the Indo-Chinese border conflict. Our defence cooperation has been ongoing since then, despite some interruptions in the 1990s due to factors beyond our control, notably the collapse of the Soviet Union, when many Soviet-era structures were dismantled and Russian ones were only just emerging. It was a difficult period, because Russia supplied about 70% of India’s military hardware. But gradually defence cooperation was restored and today it is considerable. The structure of the relationship has transformed from the sale of ready-made weapons from Russia to India to the joint development of new technologies and the production of missiles and aircraft. This is a big step forward from our past relationship.

Currently, Russia and India are implementing several joint military programs. The most important are the production and upgrading of the BrahMos missile and the construction of fifth-generation supersonic fighters, among other things. It would be desirable to see the level of cooperation that we have achieved in the field of defence maintained in other areas, especially in trade and science and technology.

The upcoming exercises will add considerably to Russian-Indian military cooperation. The situation around the world changes from year to year, and therefore the goals and objectives of these exercises also change. What do you consider their purpose to be at this moment?

The threat of armed conflict, as such, always exists theoretically, but it seems to me that today one of the greatest security challenges for Russia and India is the fight against international terrorism, as both countries, unfortunately, have been the victims of international terrorist acts. The threat of terrorist attacks in Russia has spread beyond the regions that are generally considered targets, and in India today there are attacks not only in Kashmir but in other regions and major cities as well – Mumbai and Delhi. The fight against terrorism is one area where our joint exercises and projects can have a very significant impact.

Joint naval exercises have grown in importance in recent years because of the threat of piracy, which has become a danger to the ships of practically ever country involved in international commercial shipping. Russia and India have repeatedly suffered heavy losses due to international piracy on shipping lanes. If we work together to develop methods to counter this threat together, both countries will benefit.

India-US relations are rapidly developing in parallel with the close relations between India and Russia. Although the Obama administration has apparently shifted US foreign policy priorities from India to China, the United States and India continue to cooperate on military and nuclear issues.

This leads to the next question. Given the active India-US relationship, how does the US government view Russia-India cooperation such as military exercises?

The United States should accept it as a fact. The American government has no real leverage to compel the two countries to not carry out these exercises. Military exercises are an integral component of the bilateral relations between sovereign states in today’s world. The zero-sum game is long gone. Given current realities, India-US cooperation and active India-Russia cooperation are not mutually exclusive.

000000
Newsfeed
0
New firstOld first
loader
LIVE
Заголовок открываемого материала
Access to the chat has been blocked for violating the rules . You will be able to participate again through:∞. If you do not agree with the blocking, please use the feedback form
The discussion is closed. You can participate in the discussion within 24 hours after the publication of the article.
To participate in the discussion
log in or register
loader
Chats
Заголовок открываемого материала
Worldwide
InternationalEnglishEnglishMundoEspañolSpanish
Europe
DeutschlandDeutschGermanFranceFrançaisFrenchΕλλάδαΕλληνικάGreekItaliaItalianoItalianČeská republikaČeštinaCzechPolskaPolskiPolishСрбиjаСрпскиSerbianLatvijaLatviešuLatvianLietuvaLietuviųLithuanianMoldovaMoldoveneascăMoldavianБеларусьБеларускiBelarusian
Transcaucasia
ԱրմենիաՀայերենArmenianАҧсныАҧсышәалаAbkhazХуссар ИрыстонИронауОssetianსაქართველოქართულიGeorgianAzərbaycanАzərbaycancaAzerbaijani
Middle East
Sputnik عربيArabicArabicTürkiyeTürkçeTurkishSputnik ایرانPersianPersianSputnik افغانستانDariDari
Central Asia
ҚазақстанҚазақ тіліKazakhКыргызстанКыргызчаKyrgyzOʻzbekistonЎзбекчаUzbekТоҷикистонТоҷикӣTajik
East & Southeast Asia
Việt NamTiếng ViệtVietnamese日本日本語Japanese中国中文Chinese
South America
BrasilPortuguêsPortuguese
NewsfeedBreaking
14:59 GMTAmid Rumours of US Boycott of Beijing Olympics, How Could the Move Affect the Games?
14:52 GMTUK Policing Minister Not Surprised Over Reports of Drug Use in Parliament Building
14:45 GMTLabour Unions Protest in Brussels Against Low Wages, Expensive Electricity - Photos
14:26 GMTSpanish Court Rules Employee Can be Fired for Job Abandonment During Pandemic - Reports
14:18 GMTAnger and Shock After Intruders Vomit and Urinate at Site of Manchester Arena Bombing Memorial
14:15 GMTUS, UK, Canada Concerned by Tigrayans Arrested Without Charge in Ethiopia
14:07 GMTLionel Messi, Neymar or Himself: Kylian Mbappe Reveals Who's 'Boss' at Paris Saint-Germain
13:58 GMTFormer Indian Shia Leader Embraces Hinduism After 'Death Threats From Muslim Groups'
13:48 GMTMarine Le Pen Accuses EU of 'Playing Role of Firefighter-Pyromaniac' in Ukraine-Russia Tensions
13:47 GMT'Happy a Team Like Barcelona is Interested in Me', Says Salah Amid Liverpool Contract Impasse
13:30 GMTEarth is Getting Its Own Black Box That Will Tell What Caused Humanity's Demise
12:58 GMTChina Says Plots to Thwart Ties With Solomon Islands 'Doomed' as PM Survives No-Confidence Vote
12:53 GMTPutin in Meeting With Modi, Discusses Drug-Trafficking, Terrorism and Situation in Afghanistan
12:46 GMTSri Lanka Demands Compensation From Pakistan Over Brutal Mob Killing of Factory Manager
12:30 GMTPutin and Modi Hold Negotiations at 21st India-Russia Summit
12:27 GMTRDIF: Russia Ready to Provide India With One-Shot Sputnik Vaccine for Adolescents
12:26 GMTKamala Harris' Staffers Reportedly Describe Her as 'Soul-Destroying', 'Bully'
12:26 GMTIndian Music Group T-Series Becomes World's First YouTube Channel to Exceed 200 Million Subscribers
11:56 GMTNagaland Police Accuse Indian Army of Killing Villagers as Death Toll in Firing Incident Rises to 14
11:34 GMTEuphoric Cricketers Celebrate as Team India Register Historic Win Over Kiwis in Mumbai Test Match