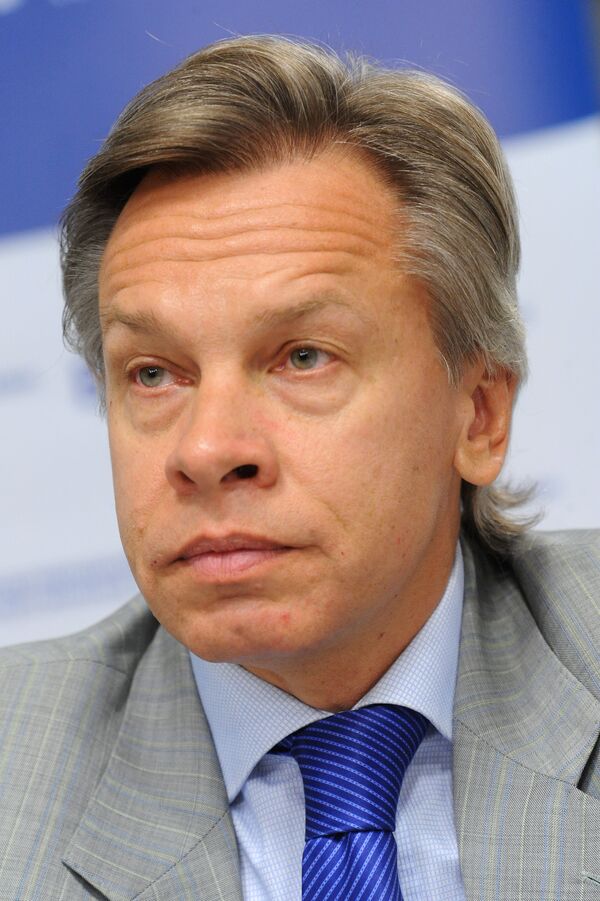 Moskovskiye Novosti, the Russian-language version of The Moscow News, a major Soviet weekly published in several languages for an international audience, celebrates its 30th anniversary this month.

Moskovskiye Novosti, the Russian-language version of The Moscow News, a major Soviet weekly published in several languages for an international audience, celebrates its 30th  anniversary this month.

Alexei Pushkov, MN deputy editor in chief for international affairs from 1991 to 1995, now has his own television show, Post Scriptum, on a major Russian channel. In an interview with RIA Novosti, he described the atmosphere at the paper in the 1990s.

Q.: What are your impressions of your time at The Moscow News?

A.: I came on board in November 1991, and I worked as deputy editor in chief for international affairs until April 1995. I was responsible for the paper’s English, French, German, and Spanish editions.

I can remember clearly how in 1993 the 100% government financing of media suddenly came to an end. Until then, pro-democracy news organizations, even ones that were outspoken in their criticism of the government, had been living off subsidies from the treasury coffers, which is one of the paradoxes of that period.

It was suggested that we try to earn our own living. We then had to prioritize, deciding which of our foreign-language editions should be kept because they are relevant and meet the needs of a large audience, and which should go.

Having spent my formative years in France, I was a staunch Francophile and a French speaker, yet I chose to shut down the paper’s French and Spanish versions to strengthen the English-language edition. The German version was then published only in Germany, and had a small but loyal readership of its own. We decided to focus our efforts on the English edition, as it could reach the broadest international audience. I reshuffled its editorial board, bringing in fresh, young talent, and made the layout more dynamic and up-to-date. Another initiative was to start producing original stories for the English paper, which until then was basically just a translation of the Russian edition. I believed this wasn’t the right approach, as The Moscow News had its own distinct style, so I arranged for it to carry a certain number of original stories alongside reworked Moskovskiye Novosti pieces.

These were still the good times for The Moscow News, before the profound crisis set in resulting from the death of its editor in chief, Len Karpinsky, one of the few genuine democrats in post-Soviet Russia, and also from the fact that MN positioned itself as a forum for perestroika. We then entered a new era, in which ownership of the major media outlets was consolidated in the hands of powerful oligarchic groups. MN suffered from the independence bug, and we tried hard not to fall under the influence of an outsider. I remember the infamous attack on the parliament building ordered by Boris Yeltsin. Despite its anti-Communist convictions, the paper harshly criticized him for the decision. We wrote that it is unacceptable for a president to use military force against his own parliament. Heads of state take a vow to uphold the constitution. They shouldn’t spend their time drinking vodka (which you don’t have to be the president to do). They should be working to prevent these kinds of situations. A legislature, however bad, may not be shot at.

I have to give fellow MN journalists their due: their truly democratic convictions trumped their political affiliation with the liberal, anti-Communist camp. But in that clash between liberalism and democracy, the newspaper stood up in support of democratic values, something for which Karpinsky and his team should deserve credit. Evidence of this can be found in the English-language editions put out at the time.

Q.: What was the atmosphere at MN like in those days?

A.: The people working at MN at that time wanted to see the advantages of a democratic government and a market-oriented economy, not just their shortcomings. Incidentally, during that short time span of 1990 through 1995, freedom of speech was greater in Russia than ever before. It was in the air. But our paper had strong moral principles, and it never let itself come out with publications or statements that could insult the faithful, for example. It was out of the question for us to write something along the lines, “Let’s throw that bastard out of the Mausoleum.” Yes, we spoke out in favor of burying Lenin, and I continue to do so. But we never let ourselves sink into tabloid-style vulgarity. We spoke out to express ourselves on issues, not to offend or ruin anyone.

A turning point came in 1993. I remember we were having huge debates. The newspaper had to decide whether it should support Yeltsin along party lines and back every effort to oppose his adversaries, or whether it should uphold principles per se – the principles of democracy, freedom, and of a level playing field in politics.

I remember Karpinsky once quoted [Yegor] Gaidar as saying, “Mr Yeltsin, crush the infamous,” meaning that President Yeltsin should go beyond suppressing the parliament’s revolt and destroy the Communist Party along with the entire left-wing opposition.

I remember Karpinsky then making a historic statement: “We know that the nation is split, that half of it, or maybe more, supported the Supreme Soviet because they were unhappy about the reforms.” Two-thirds backed the Supreme Soviet, in fact, so Karpinsky said, “Show me where the infamous is! Is it your own people that you’re going to crush?”

That’s what the atmosphere was like. I’m not saying there was absolute unanimity in our ranks. There were staunch supporters of Yeltsin among us, and there were also moderate sympathizers, like myself. But we would come together to discuss all the divisive issues, and we all continued to support the propositions that the government must never go against its own people.

Q.: How would you assess MN’s contribution to the development of Russian journalism?

A.: I believe it made a huge contribution. I know its legacy has been the subject of many a dissertation. Western analysts, political scientists, journalists, and editors would come to my office in droves, trying to find out how such an independent-minded paper could have emerged while the communist regime was still in power. Indeed, MN became famous in 1987-1988 as the flagship of perestroika, especially politics and freedom of speech. I think the paper was also instrumental in Russia’s transition to a post-communist system and political freedom. Another thing is that MN, in my view, was doomed at a time when democracy in this country was nipped in the bud. Attempts on its life came from various quarters, particularly the political bureaucracy. It would be naïve to suppose that Yeltsin’s government was truly democratic, when it was, in fact, manipulative and authoritarian. Manipulation was a means of achieving political goals, and Yeltsin’s regime was authoritarian. Just look at the 1996 election. His approval ratings were hovering between 2% and 6% in February, but he managed to win 52% of the vote in June. How is this possible? That was obviously the result of a powerful campaign full of election trickery, an ends-justify-the-means approach.

So, the political bureaucracy was the first to try to suppress freedom of speech in post-Soviet Russia. The oligarchs then followed suit.

Russian television found itself under the control of oligarchic groups soon after gaining independence from the Communist Party’s censorship. One national channel was taken by [Boris] Berezovsky, another by some fellow oligarch. [Vladimir] Gusinsky then took control of NTV. This wasn’t really an independent channel, but one that was serving narrow group interests. Its owners were on the right-liberal side of the political spectrum, and they would handpick editorial personnel with the same views. The editorial policy was also very rigid, so it would be wrong to assume that there was a lot of freedom there. The channel did criticize the government, but did so only from the point of view of their own narrow interests. It can’t be considered a truly independent broadcaster.

More often than not, Western media owners do not impose their editorial policies on the staff. In this country, however, the common approach is “He who pays the piper calls the tune.”

An era of media wars then began, mysteriously coinciding with wars for the post-Soviet redistribution of property. This all happened between 1996 and 1998. Gusinsky rising against Berezovsky; Berezovsky taking on Gusinsky; at some point the two men joining forces to fight [Anatoly] Chubais; then the Svyazinvest group came in and got a huge chunk of television, and so on and so forth.

MN rose on a wave of increasing political freedom, and it just could not survive in a situation where many media outlets were yielding their independence to oligarchs. That’s why it was eventually shut down, I guess. Attempts were made to rescue the paper, but it obviously did not fit in with that new era.