The aftershocks of Kyrgyz tragedy 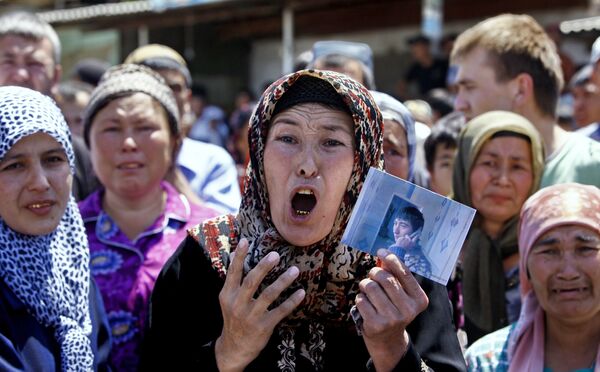 © RIA Novosti . Andrei Stenin
/
Go to the mediabank
Subscribe
International
India
Africa
I think the acute phase of rioting has passed and no troops need be sent to Kyrgyzstan. The immediate goal is to deliver humanitarian aid and help refugees by creating corridors for their movement, ensuring their return home and safety. This calls for a different type of operation, and I think, in principle, that the Kyrgyz government should deal with this problem, preferably with help from public organizations or forces such as units from Russia’s Emergencies Ministry.

Interview with Sergei Abashin, head of the Central Asia section of the Center for Central Asia, the Caucasus and the Volga-Urals Region at the Institute of Oriental Studies, Russian Academy of Sciences. Interview was taken by Samir Shakhbaz.

The world’s media are reporting the tragic events in Kyrgyzstan, which have provoked many questions. What country should send troops to restore order there? Should any troops be deployed, or can the Kyrgyz army settle the conflict?

I think the acute phase of rioting has passed and no troops need be sent to Kyrgyzstan. The immediate goal is to deliver humanitarian aid and help refugees by creating corridors for their movement, ensuring their return home and safety. This calls for a different type of operation, and I think, in principle, that the Kyrgyz government should deal with this problem, preferably with help from public organizations or forces such as units from Russia’s Emergencies Ministry. Assistance could be provided through mutual agreement or by decision of international organizations such as perhaps the CSTO, the EU and the UN...

You said riots; this is your view of the events in Kyrgyzstan. Could they be described as an ethnic conflict?

I wouldn’t say so. An ethnic conflict presupposes the involvement of two sides. But there are many sides involved in Kyrgyzstan. At the very least there are those taking part in the pogroms, the people who offer help, and the people who sympathize with Uzbeks. This creates a more complicated and motley picture of the conflict. I wouldn’t use the term “ethnic conflict” to describe it.

One question that many people are worried about, but which is difficult to give a definite answer to, is who is behind these events? A telephone conversation allegedly between Maxim Bakiyev, the son of the ousted Kyrgyz president, and his uncle was posted on the Internet the other day. It is alleged that they were behind the pogroms and had organized the events. What is your opinion?

This is the official version according to the interim Kyrgyz government and there are many arguments that support it. It is clear that Bakiyev and his team, the people he put in key posts when he was in power, are not pleased with what happened in April. They tried to resist the changes; they rocked the boat and tried to mobilize their supporters, which was one of the factors behind the events.

But I wouldn’t limit the problem to Bakiyev’s actions and I wouldn’t say that they were the only cause of what has transpired. After all, Bakiyev will not benefit from the consequences. In Kyrgyzstan and the world in general, people believe that he was the main driving force behind the events. So, I think that even if he had rocked the boat the events that followed have long been out of their control. Other interests have interfered, and the situation was compounded by spontaneous actions and violent youths …

Yes, who don’t care who they attack and who aren’t acting in the interests of any particular group; they just go on the rampage.

Are the drug barons’ interests involved in any way?

Kyrgyzstan is a country through which drugs are trafficked, where drug-related criminal groups are playing a big role and the trouble is that they are also closely connected with the politicians. Many crime bosses have gone into politics or developed close ties with political agencies. These interests are influencing the situation, but it would be unwise to limit these events to drug-related criminal groups. What do they stand to gain from tens of thousands of Uzbeks crossing the border and the thousand people who have been reported dead? They do not directly benefit from that. Of course, they are involved in these events, but they are not the main driving force behind them.

Can, or could, “unrest” in Kyrgyzstan spill across the border and develop into hostilities involving adjacent countries?

In fact, this was the main danger of these events. For the first two or three days, analysts and politicians in many countries observed the unfolding events with alarm. They feared that unrest would spread to Uzbekistan and Tajikistan, which have their own problems and contradictions too. But it seems that developments are not proceeding according to this worst-case scenario. This is largely thanks to the efforts of the governments of Uzbekistan and Tajikistan; they showed commendable restraint and did not directly interfere in the conflict.

What turn might the events take? And who will benefit from the new regime? Let’s assume that the opposition forces survive in Kyrgyzstan. So who, globally, could benefit from these events?

In the current situation, everyone would benefit from a scenario where those in power are strong and we see the development of a real state, with authority, which does at least some of the things a real state should. I think that inciting a new coup, revolution or anything of that order, would only further destabilize the situation. In principle, all sides would benefit from a stable power, the current government. The fact that this government has not yet shown any signs of activity is another matter…

Or signs of authority?

Yes, or signs of authority. But we should wait; if the situation persists and they don’t do anything, they don’t become a real state, international institutions and Kyrgyzstan’s neighbors will have to consider some form of international interference, as in Bosnia or Kosovo.

You’re scaring me: Kosovo involved a split and secession. You must be talking about international governance.

Yes, of course. The idea implies the international community’s more active involvement in the situation. But I still hope this won’t happen. The conflict will force Kyrgyz society to demand that their authorities, their leaders, act as a state should. The current forms of assistance, economic and humanitarian aid will allow the elite currently in power, the interim government, to fulfill its functions and to grow stronger. I hope this is what will happen; this is the only thing one could hope for. All other scenarios are much worse.

Mr. Abashin, thank you for your time and commentary.
Thank you.