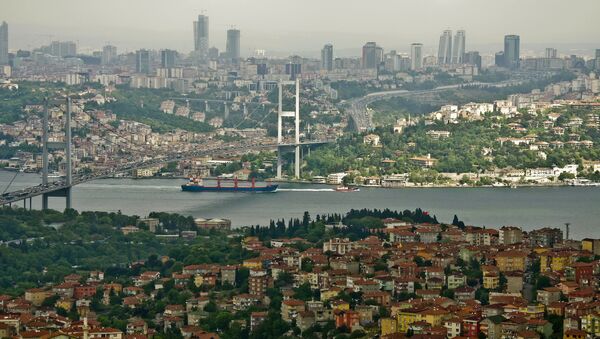 Russia has proposed clearing Turkey's Black Sea straits from oil tankers and transport oil via two pipelines, which are under construction to pump crude to Europe across the sea, Russian daily Izvestia reported

Russia has proposed clearing Turkey's Black Sea straits from oil tankers and transport oil via two pipelines, which are under construction to pump crude to Europe across the sea, Russian daily Izvestia reported.

The idea to clear the Bosphorus and Dardanelles straits, which serve as the boundary between Europe and Asia, and send oil via the Russia-backed Burgas-Alexandroupolis and the Turkish Samsun-Ceyhan oil pipelines, will be discussed by a bilateral inter-governmental commission and the issue will be raised by the presidents of both counties on May 11-12, the paper said.

Russia argues that the Black Sea straits are overloaded and it takes a long time for ships to pass through them. It is also proposed that both pipelines be managed from a single center.

Oil companies, however, say that oil shipment by sea is cheaper and tankers can take several blends of oil at a time. The idea of Russia's oil pipeline monopoly Transneft is that the straits can be used only to ship petroleum products while crude can be supplied via the two pipelines.

Experts view the proposal as bold. Burgas-Alexandroupolis is a project between Russia, Greece and Bulgaria to pump Russian and Caspian oil from the Bulgarian Black Sea port of Burgas to the Greek Aegean port of Alexandropoulis. The three countries signed an agreement to build the 280-km (174-mile) Trans-Balkan pipeline in 2007, following several years of talks.

The construction of the pipeline, in which Russian companies will hold 51% while Greek and Bulgarian firms will possess the remainder, had until recently been delayed by Bulgaria seeking better economic and environmental terms for the project.

Meanwhile, the Turkish Samsun-Ceyhan oil pipeline is already under construction but Russian companies have no stake in it so far. However, an available memorandum of understanding could offer non-Turkish (Russian and Italian) companies a shareholding of up to 50% in the project, the paper said.

Although both projects seem to be quite different and can be regarded as rival undertakings, the idea of their management from a single center does not look so absurd, if the roles of the pipes are clearly defined, the paper said.

In particular, one pipe can be used to pump crude with a high content of sulfur and the other can be used for low-sulfur crude. Moreover, the Turkish pipeline will run to Ceyhan, which Turkey has pledged to make almost the most powerful oil port in the world, the paper said.

The negotiations are not easy as Turkey estimates future oil transits across the Black Sea at 200 million metric tons (1.5 billion barrels) of crude annually and seeks guarantees for oil supply volumes.

Russian oil pipeline monopoly Transneft, however, has inferred some 132-136 million tons (968-997 million barrels) of oil annually and says it can only ensure the technical conditions for oil transportation, the paper said.

Experts say, however, that although both pipelines can be merged technically, it is more logical to use the scheme "two pipelines - two management companies," the paper said.