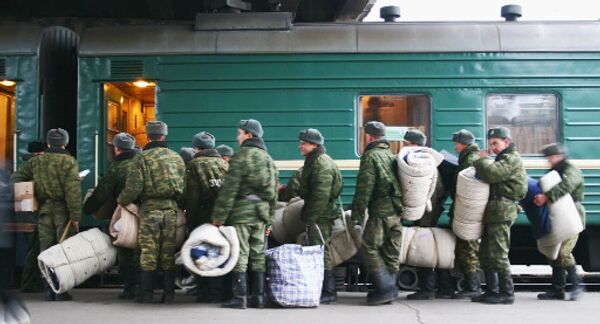 A Russian General Staff official suggested on Thursday draft age should be extended to 30 years and remaining deferrals scrapped.

"In most countries, those who are well past 30 are called up, but we have proposed raising [the draft age] to 30," said Col. Gen. Vasily Smirnov, head of the Chief Organization and Mobilization Directorate.

At present, all Russian men between the ages of 18 and 27 are obliged by law to perform one year of military service, but reports of military hazing and harsh conditions encourage people to evade conscription by bribing military officials and doctors for medical exemption certificates.

The general said, however, that the minimum age of 18 should not be raised.

"Eighteen is an age when a person has already made his life's choices, is healthy, full of vitality, and military service will only benefit a young body," he said at a roundtable with members of the upper house of Russia's parliament.

Smirnov also said the term of the spring call-up should be extended by two months and last from April 1 through August 31 rather than the current June 30.

The proposals come in the wake of changes in the Russian military designed to give it a "new look."

On April 21, Defense Minister Anatoly Serdyukov said conscripts will have a five-day working week and civil workers will be hired to cook food and clean.

Following a series of incidents involving the deaths of military conscripts in the past few years, Russian authorities have moved to boost the safety of servicemen and improve the military's image.