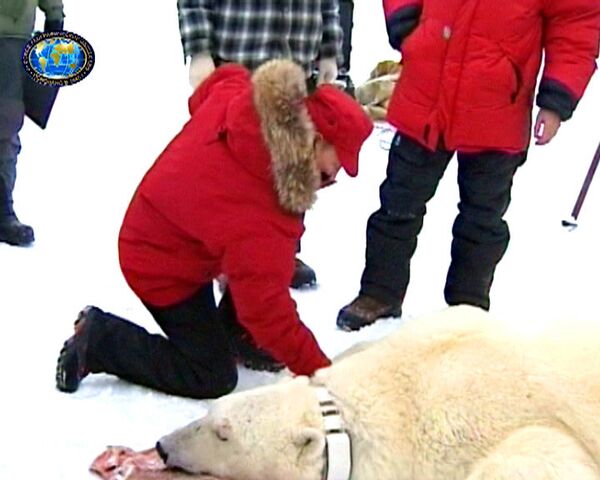 Prime Minister Vladimir Putin gave Russian scientists a hand on Thursday, putting a satellite collar on a polar bear during a trip to Russia's Arctic.

Putin traveled to Alexandra Land, one of the islands of the Franz Josef Land archipelago in Russia's far north where scientists are studying the movements of endangered polar bears. He was shown putting the device on a bear that researchers had caught in a special trap.

Satellite collars allow scientists to follow the migration of animals, observe their daily and seasonal movements and identify habitats.

"Habitation is getting more and more difficult because of the melting ice caps. It is important for us to know the movements of the polar bear, how it reproduces and how it rears its young," Putin said.

He said the Russian government has stepped up efforts to protect the endangered species.

"An international law banning the hunting of polar bears came into force in 1973-74. In the 1990s cases of poaching increased but now we have put things back in order."

Russian polar bear specialist Nikita Ovsyannikov said populations were under stress because of the changing habitat, melting ice and reduction in food sources.

"It's difficult to count the bears because they live on the ice, but we can record increased mortality," Ovsyannikov said.

He said the melting ice was forcing the animals to move to dry land, where there is less for them to eat and they become more vulnerable to poachers.

The deputy director of the Institute of Ecology and Evolution, Vyacheslav Rozhnov, said research into the redistribution of polar bears is being carried out in the United States, Europe and now, for the first time, Russia. He said it is essential to track the movements of the bear to increase understanding on how it may be helped to survive.

"The reduction of the ice sheets, caused by climate change and human activities, is bringing about a global redistribution of polar bears, but no one knows how it is happening," Rozhnov said.

Russia's research into conservation of polar bears is made possible by a 1 million ruble ($34,000) grant form the Russian Geographic Society.

Rozhnov says the findings of the studies should be an incentive to preserve conditions for the survival of polar bears. Currently there are an estimated 6,000 polar bears in the Russian part of the Arctic of a total of 25,000 worldwide.