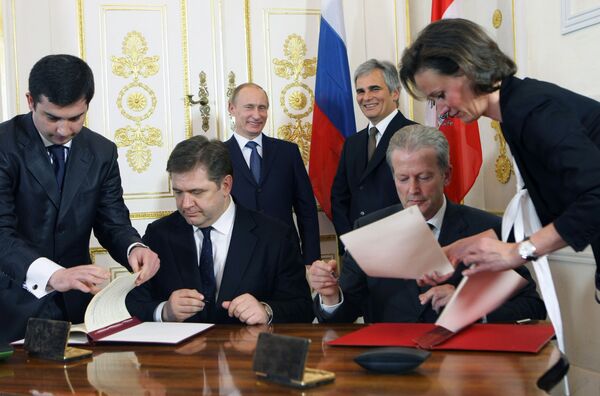 © RIA Novosti . Aleksey Nikolskiy
/
Go to the photo bank
Subscribe
There are no delays in implementation of the South Stream gas pipeline project, Russian Prime Minister Vladimir Putin said in Italy on Monday

There are no delays in implementation of the South Stream gas pipeline project, Russian Prime Minister Vladimir Putin said in Italy on Monday.

South Stream, which shareholders include Russian energy giant Gazprom and Italy's Eni, is designed to pump 63 billion cubic meters of Russian natural gas annually to Bulgaria and further on to Italy and Austria.

"There are no delays on South Stream yet," Putin said commenting on reports about inter-company problems between Gazprom and Eni which might affect the project's deadline in 2015.

Putin said an agreement on France's Electricite de France (EDF) becoming a project shareholder is due to be signed in June. The EDF will acquire some 20% in the project.

"The EDF agreed and expressed its desire to receive 20% [in the South Stream]," Putin said. "A corresponding agreement will be signed in St. Petersburg in June this year. Of course, this will enhance energy stability and security in Europe," Putin continued.

The pipeline is due to go into operation by the end of 2015. It will run under the Black Sea from the Russian port city of Novorossiysk to the Bulgarian port of Varna.

The intergovernmental agreement with Austria was signed in the presence of Putin and Austrian Chancellor Werner Faymann. The agreement is the last document necessary for the project's go-ahead.