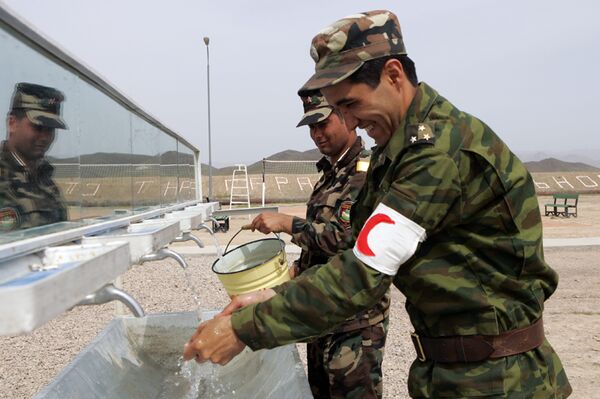 Over 1,000 servicemen, more than 150 pieces of military hardware, L-39 combat trainers, An-2 military transport planes and Mi-8 helicopters from Russia, Kazakhstan, Kyrgyzstan and Tajikistan took part in the Rubezh-2010 exercises, which started on April 22 at the Chorukh-Dairon training range.

"The exercises were a success. The units have accomplished all the set tasks," the official said.

The CSTO is a security grouping comprising the former Soviet republics of Armenia, Belarus, Kazakhstan, Kyrgyzstan, Russia, Uzbekistan, and Tajikistan.

Five of the seven members signed an agreement on the creation of the Collective Rapid Reaction Force in February 2009. Belarus, which initially refrained from signing the deal because of a trade dispute with Russia, joined it later last year.

Uzbekistan has so far refused to join the force, saying it opposes stronger Russia's role in Central Asia. Uzbekistan is also at odds with regional neighbor Kyrgyzstan, which hosts a Russian airbase.

The CSTO members insist that the rapid reaction force is designed to improve the security of the CSTO members against the backdrop of existing and potential threats," including terrorism, extremism, drug trafficking, natural disasters and to enhance the organization's role in ensuring international security.

However, many experts believe that the creation of a powerful military contingent in former Soviet Central Asia by members of the Russian-dominated security grouping is seen as Moscow's bid to counterbalance NATO.