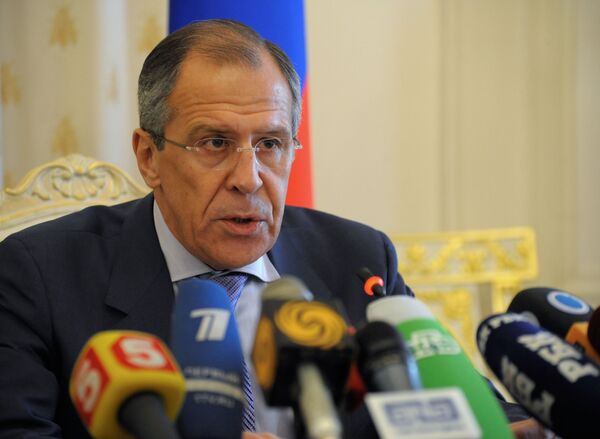 Russian President Dmitry Medvedev and U.S. President Barack Obama are to sign a new strategic arms treaty on Thursday in Prague. The pact will replace the START 1 treaty, the cornerstone of post-Cold War arms control, which expired on December 5.

"Russia has the right to withdraw from the strategic nuclear weapons treaty if a quantitative and qualitative increase in U.S. strategic missile defense significantly influences the effectiveness of Russian strategic nuclear forces," the minister said adding that Russia itself will determine the extent of such influence and that this was a specific precondition of Russia.

Under the deal, which will have a validity term of ten years unless it is superseded by another strategic arms reduction agreement, strategic offensive weapons are to be based solely on the national territories of Russia and the United States.

Lavrov said that Washington's plans for a missile defense shield do not presently constitute any threat to Moscow's strategic interests, but he emphasized that Russia did not rule out that the plans could eventually constitute a threat.

"If the strategic missile defense shield [...] is estimated by our military specialists to be posing a risk for Russia's strategic nuclear forces, then we will have the right to use the conditions included in the [new arms cut] deal."

Lavrov expressed hope that the new deal will be ratified by the Russian State Duma and the U.S. Congress by the end of April.

Lavrov has repeatedly suggested that a new nuclear arms cuts deal be linked to Washington's missile operations in Eastern Europe.

Many experts believe, however, that the Russian demand will probably not be satisfied as the U.S. Senate is unlikely to ratify any document containing a formal link between arms cuts and the missile shield.

Russia and the United States have been negotiating a replacement to the Strategic Arms Reduction Treaty since Medvedev and Obama met in April last year, but finalizing a document has dragged on, with U.S. plans for missile defense in Europe a particular sticking point.

In February, Bulgaria and Romania said they were in talks with U.S. President Barack Obama's administration on deploying elements of the U.S. missile shield on their territories from 2015.