Russia's Black Sea Fleet may lose all warships by 2015 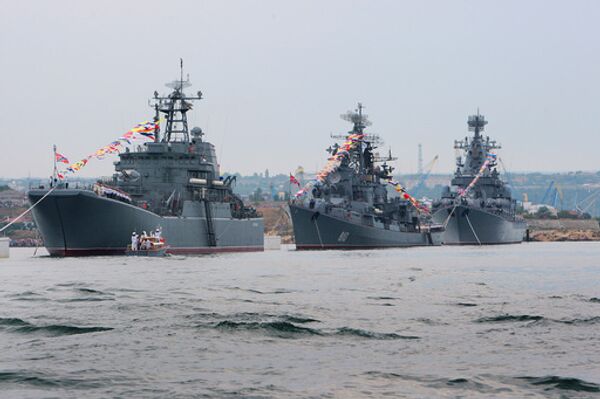 © RIA Novosti . Taras Litvinenko
Subscribe
The majority of warships in the Russian Black Sea Fleet have been in service for over 30 years and would not be fit for sea missions by 2015.

The majority of warships in the Russian Black Sea Fleet have been in service for over 30 years and would not be fit for sea missions by 2015, a Russian newspaper said.

"The crews will certainly try to keep their ships in decent condition until the last moment, but the "iron" has its service life. Nobody would dare to set sail on a ship whose bottom has rotten away," the Gazeta newspaper said on Friday citing a Navy source.

Earlier reports indicated that the Black Sea Fleet is set to decommission the Ochakov destroyer and a diesel submarine built in 1982. Next on the "scrap" list are the Kerch destroyer and several large support ships.

The fleet does not expect any additions in 2010 and the prospects of new deliveries in the next few years are also quite slim, the source said.

The official said the only solution for the looming crisis would be the construction of at least a dozen of Project 20380 corvettes which have been designed to protect Russia's coastal waters and oil and gas sea transportation routes, especially in the Baltic Sea and the Black Sea.

The first Project 20380 corvette, the Steregushchy, was put into service with Russia's Baltic Fleet in October 2008. The second, the Soobrazitelny, was floated out on March 31, and two other ships of the same series, the Boyky and the Stoyky, are under construction.

The source said that the Russian shipbuilding industry simply does not have the capacity to build the sufficient number of warships and submarines to satisfy the needs of the fleet.

"All shipbuilding yards are swamped with foreign orders years ahead, and it is difficult to raise the production capacity even with sufficient financing because they do not have enough skilled workers," the source said.

He expressed hope that Russia would be able to order some warships to be built at Ukrainian shipyards now that Moscow and Kiev have set step on the way to improve relations that soured during the presidency of Viktor Yushchenko.