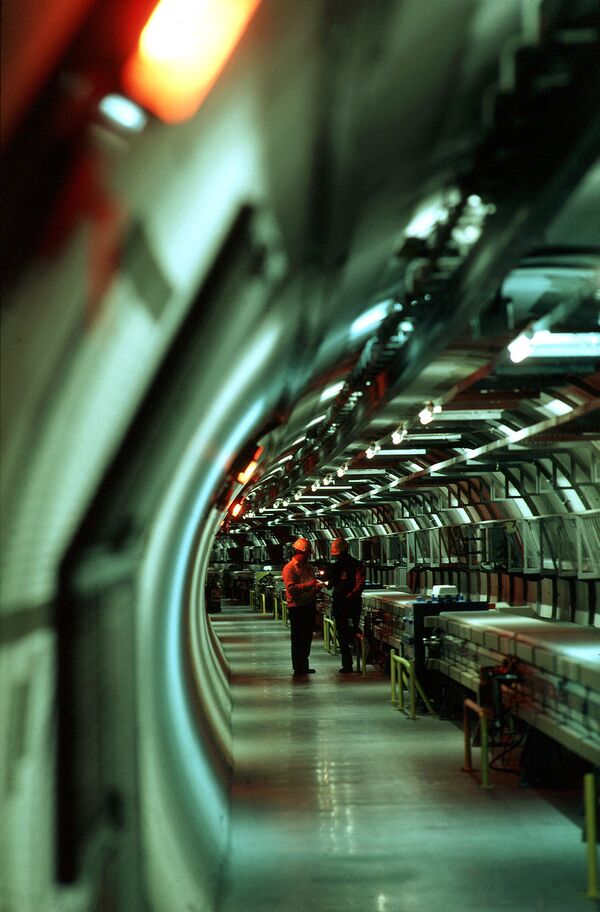 © CERN
Subscribe
International
India
Africa
The world's most powerful atom smasher will hold first attempt for collisions at an energy of 7 tera-electron volts (TeV), or 3.5 TeV per beam, on Tuesday.

The world's most powerful atom smasher will hold first attempt for collisions at an energy of 7 tera-electron volts (TeV), or 3.5 TeV per beam, on Tuesday.

The LHC is to operate at half its design energy — 7 TeV — until late 2011, after which it will be shut down for about a year to then upgrade to its full design energy of 14 TeV.

The Large Hadron Collider (LHC) accelerated its proton beams to 3.5 TeV per beam on March 19, but no collisions were practiced then.

"With two beams at 3.5 TeV [each], we're on the verge of launching the LHC physics program. But we've still got a lot of work to do before collisions," CERN's Director for Accelerators and Technology, Steve Myers, said in mid-March.

"Just lining the beams up is a challenge in itself: it's a bit like firing needles across the Atlantic and getting them to collide half way," he said.

When CERN launched its previous collider LEP in 1989 it took three days to get first collisions.

Speaking at a March 8 press conference, CERN Director General Rolf-Dieter Heuer said the LHC could start generating its first scientific breakthroughs into elusive dark matter even while operating at half-capacity.

The $5.6 billion international LHC project has involved more than 2,000 physicists from hundreds of universities and laboratories in 34 countries since 1984. Over 700 Russian physicists from 12 research institutes have taken part.

Work to repair and upgrade the collider after the breakdown cost almost $40 million and took more than a year. A system to protect it from such accidents, named the Quench Protection System, was installed, and the first beams were injected into the LHC on November 20 last year.