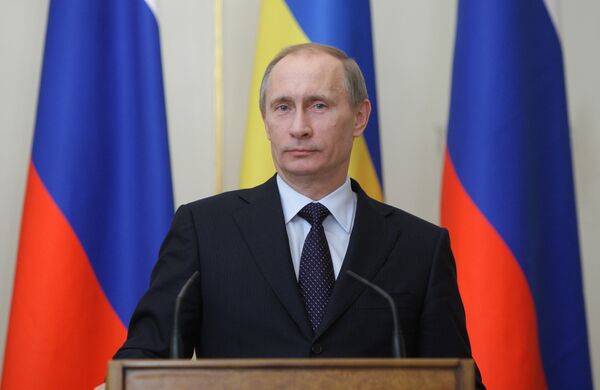 Russia and Ukraine will discuss a possible reduction in the price that Kiev pays for Russian gas, Prime Minister Vladimir Putin said Thursday.

Ukrainian President Viktor Yanukovych, who came to power in February after narrowly winning a presidential runoff against then premier Yulia Tymoshenko, has been seeking to revise a long-term gas deal signed by Tymoshenko and Putin in early 2009.

"We agreed that there are no topics closed to discussion," Putin told journalists after talks with his Ukrainian counterpart Mykola Azarov in the Moscow Region.

Putin disagreed with a journalist who called the gas contracts "unfair."

"We do not think the contracts' parameters are unjust or unbeneficial," he said. "As a result of long, very hard talks, we found a compromise. The compromise is that we are switching over to market price formation - both in gas and transit prices."

"If the question of reviewing prices is raised, then the question 'what for?' arises. We asked our colleagues what they are ready to offer in response," the Russian premier said.

Neither Putin, nor his counterpart Azarov specified any figures or outlines of proposals to be raised at the future gas talks, but media reports earlier said that Kiev would like gas prices to be nearly halved to $170 per 1,000 cu m.

In return for cheaper gas, Ukraine wants to offer Russia a stake in its gas transportation system, which currently accounts for about 80% of Russian natural gas exports to Europe.

Last year, Russia reduced its gas price for Ukraine by 20%, but in 2010 the market price, which fluctuates depending on oil prices, was introduced. In the first quarter of this year, Ukraine will pay $305 per 1,000 cubic meters of Russian gas. The price will grow to $320 in the second quarter due to rising oil prices.

Putin also said Russia is positive about the idea of creating a consortium with Ukraine to modernize the Ukrainian gas transportation system and that it is ready to invest funds into the project.

At the press conference, the two premiers said however that Russia and Ukraine would not directly link a reduction in prices with Russia's stake in the gas consortium.

Putin said there were no proposals on the table on the principle of "you give us the pipeline and we will give you the [lower] gas prices."

The project was put on hold when West-leaning president Viktor Yushchenko came to power in Ukraine in 2004.

Russia has made repeated attempts to obtain a stake in the Ukrainian gas pipeline network to modernize the system and ensure uninterrupted gas supplies to Europe. Ukraine has so far resisted, saying a consortium with Russia would jeopardize its sovereignty.

According to a poll conducted in Ukraine earlier in March, 40.5% of respondents welcomed the idea of a gas consortium with Russia. A total of 23.3% opposed the move.

Azarov was appointed prime minister after Yanukovych's chief rival, then premier Tymoshenko, was dismissed after a vote of non-confidence on March 11.

Yanukovych has repeatedly claimed he wants to boost ties with Russia, which deteriorated during his predecessor Yushchenko's presidency.