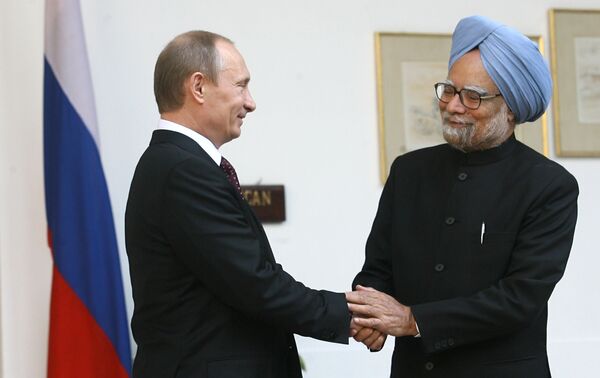 "I would like to stress that Russia is not maintaining military cooperation with Pakistan as it takes into account the concerns of [our] Indian partners," Putin said after a meeting with Indian Prime Minister Manmohan Singh.

In the 1990s, Pakistan was the chief purchaser of T-80UD tanks produced by Ukraine.

India and Pakistan resumed talks on normalizing bilateral relations for the first time in many years in 2008, but the peace hopes were shattered when a coordinated terrorist attack hit the Indian city of Mumbai in November 2008, claiming at least 166 lives and wounding more than 300 people.

India then blamed the Pakistani-based Lashkar-e-Taiba movement for the assault and said it wanted to see a "visible response" from Islamabad.

New Delhi has a long history of military ties with Moscow. The current cooperation program comprises about 200 joint projects, including the transfer of technology for the licensed assembly of T-90 tanks in India, the production of BrahMos missiles and the purchase of Smerch MLRS by India.

Earlier on Friday, Russia and India signed a $1.5-billion contract on the supplies of 29 more MiG-29K Fulcrum-D carrier-based fighter jets to New Delhi.

The two countries signed a contract stipulating the supply of 12 single-seat MiG-29Ks and four two-seat MiG-29KUBs to India in January 2004. The contract is part of a $1.5 billion deal to deliver the Admiral Gorshkov aircraft carrier, currently being retrofitted in Russia for the Indian navy.