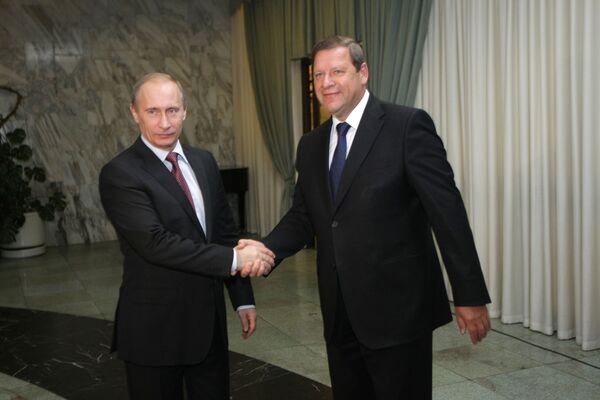 © RIA Novosti . Alexei Nikolsky
/
Go to the mediabank
Subscribe
International
India
Africa
The Russian and Belarusian prime ministers agreed on Saturday to hold the next meeting of the Union government in March.

The Russian and Belarusian prime ministers agreed on Saturday to hold the next meeting of the Union government in March.

According to a spokesman for the Russian head of government, Vladimir Putin and Sergei Sidorsky discussed energy and financial cooperation in a telephone conversation.

"Putin and Sidorsky have agreed to hold the next meeting of the Union government of Russia and Belarus in March in the city of Brest," Dmitry Peskov said

On Wednesday, Russia and Belarus signed an array of agreements on crude oil deliveries to the former Soviet state and transits to Europe.

Russian oil supplies via the ex-Soviet republic have continued throughout the dispute. A spat between Moscow and Minsk in 2007 led to disruptions in supplies to Poland and Germany.