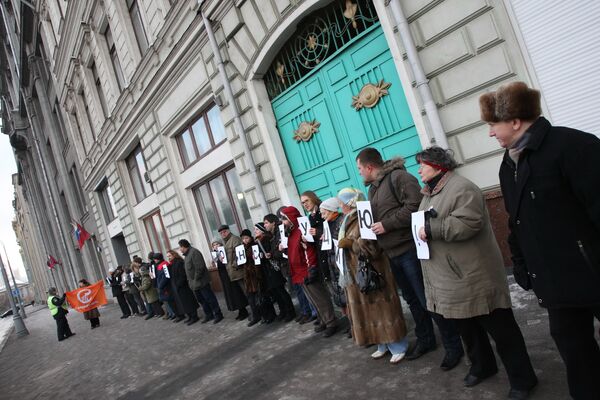 RIA Novosti on Wednesday expressed its strong disagreement with the decision of a Moscow court, who found one of the agency's photojournalists guilty of taking part in an unsanctioned protest in Moscow.

RIA Novosti on Wednesday expressed its strong disagreement with the decision of a Moscow court, who found one of the agency's photojournalists guilty of taking part in an unsanctioned protest in Moscow.

The agency said in a statement that it had assigned Andrei Stenin to cover a protest in front of the presidential administration building on December 12, 2009, but he was detained as a protester while carrying out his professional duties.

The Tverskoy district court ordered the journalist to pay a 500-ruble (about $17) fine. It agreed with the prosecution's contention that Stenin was among the protesters who were standing in a line holding sheets of paper with letters that together spelled out the phrase "Respect the Constitution!"

Stenin denied the charges. He said he was performing his professional duties but not taking part in the demonstration when he was detained.

RIA Novosti supported its photographer, confirming that he had been assigned to cover the protest.

The state news agency said in a statement that the court's decision was based on falsified evidence and through it the judge actually made the journalist a victim of arbitrary police behavior.

"We consider the judge's decision unjust and creating a dangerous precedent," RIA Novosti editor-in-chief Svetlana Mironyuk said, adding the decision provided an opportunity for any journalist performing his duties to be charged based on "absurd police evidence."

There were many discrepancies and contradictions in the case proving the case was a frame-up, the statement said.

Disregarding the fact that Stenin had professional photography equipment and showed officers his journalist identity card, police transferred the case accusing Stenin of being a participant in the protest to the court, it said.

RIA Novosti Deputy CEO Mikhail Safronov said Stenin was "accidentally detained together with participants of the meeting, without any grounds, and then the police and court machine started to defend 'the honor of the uniform.'"

The agency said it would defend its position and the journalist's right to do his job and would appeal the judge's decision in a higher court. It will also file a claim to the Russian Prosecutor's Office demanding a probe against the police officers who carried out the arrest.

The agency asserts that the Constitution of the Russian Federation, which guarantees the right to collect and obtain information, and Russian media law allow journalists to perform their duties and cover events regardless of whether the events were authorized or not. It said that without such guarantees, the media cannot fulfill its function - informing society.