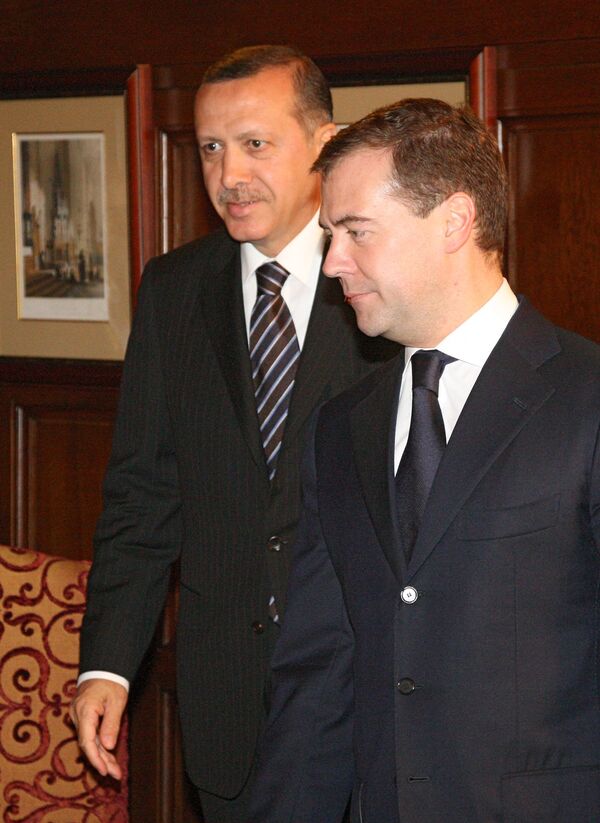 Meeting with visiting Turkish Prime Minister Tayyip Erdogan at his country residence near Moscow, Medvedev highlighted joint gas and oil projects: "We are happy to maintain serious cooperation in this sphere."

Russia and Turkey signed energy deals in August 2009, which will support Turkey's drive to become a regional hub for gas and oil transits while helping Moscow diversify supply routes and potentially maintain its monopoly on natural gas shipments from Asia to Europe.

Turkey allowed Russia's Gazprom to use its sector of the Black Sea for the South Stream pipeline to pump Russian and Central Asian gas to Europe bypassing Ukraine. And Russia agreed to join a consortium to build the Samsun-Ceyhan oil pipeline from the Black Sea to the Mediterranean.

The two states also agreed to expand the existing Blue Stream gas pipeline for possible shipments via Turkey to Cyprus and Israel.

Russia was also reported to be seeking to take part in the construction of Turkey's first nuclear power plants.

Echoing the Russian leader, Erdogan highlighted the importance of energy ties and said their countries enjoy "an exemplary cooperation" in the sector.

Medvedev said he hoped Erdogan's current visit will promote "stronger ties between our countries," which he said were important for "addressing complicated regional problems."

The two bitter rivals have been locked in a dispute over Nagorny Karabakh since before the breakup of the Soviet Union. Russia has been driving efforts to reach a settlement in the conflict over the ethnic-Armenian region in Azerbaijan, which has been de facto independent since the 1990s.