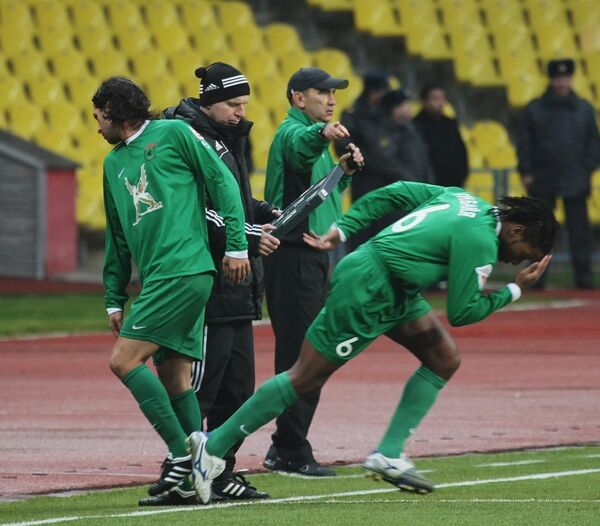 © RIA Novosti . Vladimir Fedorenko
/
Go to the photo bank
Subscribe
In a year that showed Rubin's first title was no fluke, the leading Moscow clubs and Zenit St. Petersburg were left to rue what might have been as each changed coach mid-season.

In a year that showed Rubin's first title was no fluke, the leading Moscow clubs and Zenit St. Petersburg were left to rue what might have been as each changed coach mid-season.

The Tatarstan side won the title with a week to spare, but finished the season with a 3-0 procession past Kuban, confirming the Krasnodar team's expected relegation after just one season in the top flight.

Rubin, whose manager Kurban Berdyev has been in charge since 2001, when the club was still in the First Division, won more games and points away from home than in Kazan, their only road loss coming against Lokomotiv Moscow in early October.

Berdyev's long reign stands in stark contrast to the managerial merry-go-rounds in the other top clubs, which saw all of them end the season with Russian coaches.

Spartak Moscow were the first to change trainer, ditching Danish great Michael Laudrup in late April and moving general manager and club legend Valery Karpin downstairs. Taking over with the team lying 10th, Karpin brought in Spartak's greatest manager, Oleg Romantsev, as an adviser and inspired the team to second place, pushing Rubin all the way until three defeats in their last three matches.

The second of those losses came against Zenit, who clinched third place with a 2-1 win in St. Petersburg. The 2007 champions' season had threatened to fall apart following Dick Advocaat's announcement in the summer that he would not extend his contract and would join the Belgian national side at the end of the year.

Zenit were eighth when the Dutch trainer was dismissed in August, and although caretaker Anatoly Davydov did well enough to keep the job until the end of the season, former Roma coach Luciano Spalletti is rumored to be on the verge of taking up the post.

A hangover from Advocaat's time in charge briefly threatened Zenit's third-place finish, which puts them into the Champions League qualifiers next August, as fourth-placed Lokomotiv Moscow finished level with Zenit on 54 points.

Back in April, the sides drew 1-1 in Moscow, but Advocaat erred with a substitution that left Zenit with more than the allowed three foreigners on the pitch. The Railwaymen were initially handed a 3-0 victory, but that was turned into a fine for Zenit on appeal, with the result allowed to stand.

Lokomotiv clinched fourth, and Europa League play next year, with a routine 3-1 win in the northern suburbs of Moscow against Khimki, their 16th-straight reverse. With just two wins and 10 points all season, Khimki were the second-worst top-flight side in the history of the Russian league. Tyumen managed just eight points in 1998.

Lokomotiv's season took a turn for the better in June when Yury Syomin, who led the club to two championships and a record five Russian Cups in the early 2000s, returned to the trainer's seat after a spell in charge of Dynamo Kiev.

Continuing the trend of moving to Russian coaches were CSKA Moscow, who like Rubin are still in with a shout of reaching the Champions League knockout stages. Starting the season with Brazilian Zico in charge, the army side ousted him in favor of Spaniard Juande Ramos in September, but the former Real Madrid, Tottenham Hotspur and Sevilla head coach lasted just seven weeks before Leonid Slutsky was brought in on a three-year contract.

Khimki and Kuban, who again failed to last more than a season in the top division, will be replaced next year by Anzhi Makhachkala and Alania Vladikavkaz, doubling the number of trips to the volatile North Caucasus region.