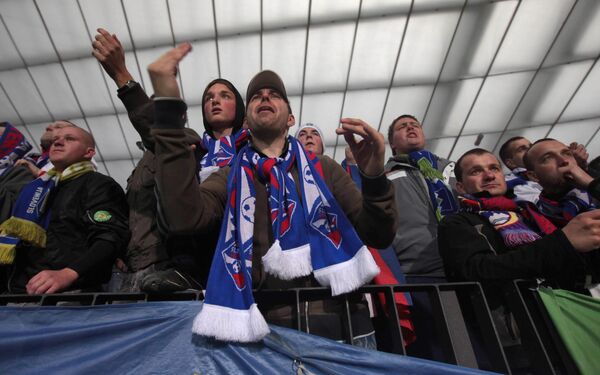 Guus Hiddink's Russia lost 1-0 away to Slovenia on Wednesday evening and will miss out on the 2010 World Cup finals.

MARIBOR, November 19 (RIA Novosti) - Guus Hiddink's Russia lost 1-0 away to Slovenia on Wednesday evening and will miss out on the 2010 World Cup finals.

The second-leg match saw Russia, with star player Andrei Arshavin having a disappointing evening, reduced to nine men by the 90th minute as they threw men forward in an attempt to level the score on the night.

After losing 2-1 in Moscow in the first leg on Saturday, Slovenia knew that a 1-0 win would be enough to send them to their second ever finals on the away goals rule, and a 43rd minute goal from Zlatko Dedic gave them the result they needed.

The hosts started dangerously in the tiny Maribor stadium, Igor Akinfeev saving from point-blank range in the 2nd minute after Milivoje Novakovic was left with time and space in the penalty area.

Russia, watched by President Dmitry Medvedev, were unable to get into their rhythm, and almost fell behind when Sergei Ignashevich chested an Andraz Kirm cross onto his own post.

Slovenia continued to sweep forward, and in the 26th minute Akinfeev again saved Russia, holding on to another close-range Novakovic effort.

Just as it looked as if Guus Hiddink's men were getting back into the game, Valter Birsa crossed, and Zlatko Dedic pounced to steer the ball past Akinfeev in the 43rd minute.

Hiddink made two changes at the break, bringing off Renat Yanbaev for Sergei Semak, whose absence in the starting line-up was believed to be due to a slight injury, and Alexander Kerzhakov coming on for Tottenham's Roman Pavlyuchenko.

Russia began the second half in more active fashion, but their hopes of getting back into the match were dealt a blow when Kerzhakov was given a straight red card after being judged to have kicked out at keeper Samir Handanovic. The Dynamo Moscow player claimed he was going for a loose ball.

Stuttgart striker Pavel Pogrebnyak replaced Everton's Diniyar Bilyaletdinov and was immediately in the thick of things, Handanovic getting down to save his powerful header in the 77th minute.

With time running out for the desperate Russians, Chelsea's Yury Zhirkov, by far Russia's best outfield player, burst into the Slovenian box only to see his fierce shot pushed away by the unbeatable Handanovic.

Minutes later, Zhirkov was off after getting a second yellow for a bizarre touchline incident in which he attempted to get the ball back to return it to play.

With Akinfeev even joining his teammates in the box, Russia threw everyone forward, but CSKA Moscow's Vasily Berezutsky was unable to convert the last chance of the evening, shooting high and wide in injury time.

"I'm upset, of course, just like our fans," Medvedev said straight after the game. "Luck was on Slovenia's side today."

Back in Russia, the millions who had gathered around TV screens were left with a familiar feeling of underachievement.

"The failure to make the World Cup is a real blow for Russia," Marc Bennetts, author of Football Dynamo, commented. "The side's absence in South Africa next summer could have a huge effect on the development of Russian football."

"It is not also clear what will happen to Hiddink now," he went on. "Questions will surely be asked about his tactics and team selection for both the play-offs and the qualifier against Germany."

Russia were joined in their World Cup misery by neighbors Ukraine, who lost 1-0 to Greece in Donetsk after drawing the first leg 0-0 in Athens.