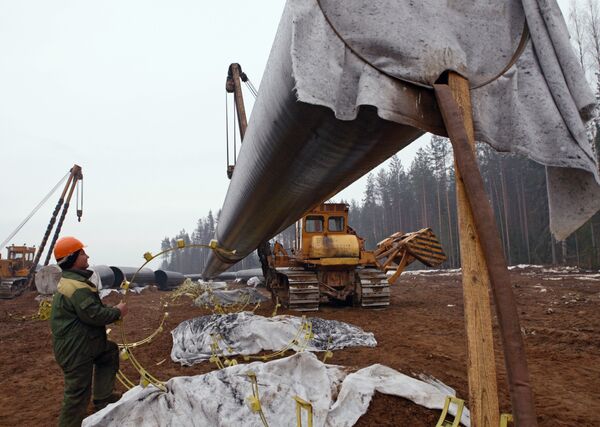 Subscribe
The volume of natural gas deliveries to Denmark via the Nord Stream pipeline could later be increased to 3 billion cubic meters a year, the Russian prime minister said on Monday.

MOSCOW, November 2 (RIA Novosti) - The volume of natural gas deliveries to Denmark via the Nord Stream pipeline could later be increased to 3 billion cubic meters a year, the Russian prime minister said on Monday.

"In the future, this volume could be tripled," he said.

The Nord Stream pipeline, which will carry gas from Russia to Germany under the Baltic Sea, bypassing Poland, Belarus and Ukraine, is being built jointly by Russia's Gazprom, Germany's E.ON Ruhrgas and BASF-Wintershall, and Dutch gas transportation firm Gasunie with an estimated price tag of $12 billion.

On October 20, Denmark became the first country to approve the pipeline's route. The Danish Energy Authority issued Nord Stream AG, the Nord Stream operator, a license for the pipeline to pass across Denmark's territorial waters (87.7 km) and its exclusive economic zone (49.9 km).

Putin said the decision had helped improve relations between Russia and Denmark, adding that it was an example of a balanced, non-politicized approach toward energy issues.

His remark was an indirect jab at Estonia, whose parliament on Tuesday expressed serious concern over the possible environmental fallout from the Nord Stream and said it should not be allowed to go ahead.

Estonian MPs said in particular that the project's developers "failed to take into account the specifics of the Baltic Sea as a sensitive ecosystem."

The pipeline will not pass through Estonia, so it has no direct say in the project, but it can present its point of view to transit countries.

Estonian MPs urged their colleagues in other Baltic states to closely supervise environmental risk assessment and the process of granting construction licenses.

The environmental safety of the project, which is due to go on stream in 2012, has been queried by several transit countries, including Finland.