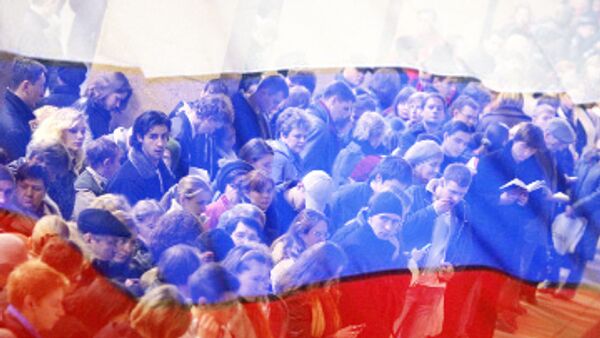 © Россияне
Subscribe
Russia secured the 69th place out of 104 in the Legatum Prosperity Index 2009, a global study of national welfare, the research institution said in a statement published on Tuesday.

MOSCOW, October 27 (RIA Novosti) - Russia secured the 69th place out of 104 in the Legatum Prosperity Index 2009, a global study of national welfare, the research institution said in a statement published on Tuesday.

According to the statement, Scandinavian countries are the leaders in the rating, which considers not only standard macroeconomic indexes, such as the gross domestic product, unemployment and inflation, but also various welfare characteristics, including the quality of education and health care, the development of democratic institutions, business and innovations, as well as governmental structure, social capital and personal freedom in the countries being analyzed.

Finland, which was found to correspond to the characteristics of a prosperous state most of all, secured the first place in the rating. Sweden proved to be third, and Denmark took the fourth place in the list.

Switzerland was given second in the rating by Legatum experts.

Zimbabwe turned out to be the last in the 104-member enumeration.

According to Legatum experts, national welfare of such countries as the US, Germany, Britain and France yields to social-oriented countries of Northern Europe. The US managed to secure the ninth place in the rating, while Britain, Germany and France took the 12th, 14th and 17th places, respectively.

However, Russia, with its 69th position in the list, left behind China, which, despite its rapid economic development, has only managed to take the 75th place in the rating due to its backward governmental institutions and the low level of democratic development. The same reasons moved Russia 12 positions down in this year's rating, the statement said.

Legatum Prosperity Index, which has been published annually since 2006, evaluates the welfare of 90% of the Earth's inhabitants.