Russian scientists set to clear up sky with air ionizer 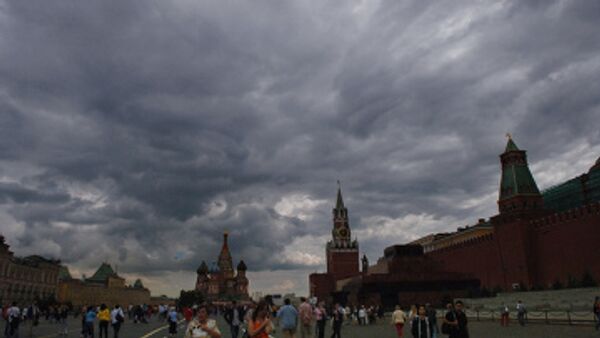 Subscribe
Russian scientists are set to clear up autumn clouds above Moscow using an air ionizer on Friday, said professor Dmitry Rototayev, chief of the Moscow Science and Technology Committee.

The experiment would take place in the downtown Moscow street of Arbat. Scientists will target the clouds with a stream of ions using a device, similar to an air ionizer invented by a Soviet scientist, Alexander Chizhevsky. The stream of ions is expected to lift clouds to upper layers of the atmosphere, where they would disperse due to a temperature change.

Scientists expect the sky to clear up on the area of about five square km (2 square miles) in two or three hours after the experiment.

"I'm not sure if the sun will be visible, but we hope to get blue skies at the very least," Rototayev said.

Other scientists have been skeptical about the experiment, mainly about the power output of the device, which is equal to that of an electric kettle.

"Weather phenomena in the atmosphere, [such as] turbulence, cyclones and anticyclones, are extremely powerful... I wonder how a small device can influence it?" said Lyudmila Krasnokutskaya of the Institute of Atmospheric Physics of the Russian Academy of Sciences.

"What can two kilowatts do to winds, clouds, million tons of water, powerful air currents in the atmosphere? It is unreal simply due to energy factors," said Viktor Savrin, deputy chief of the Research Institute for Nuclear Physics at Moscow State University.

Other scientists say that the impact on weather of much more powerful air ionizers, such as high voltage power lines, has so far been registered.

"In Moscow, in any district of the Moscow Regions there is a plenty of high voltage equipment, which ionize air more effectively than any special device. In this respect, an idea to develop such an ionizer looks quite disputable," a source at the Chair of Physics of Athmosphere of the Moscow State University's Faculty of Physics told RIA Novosti on the condition of anonymity.

He said, however, that air ionization does have an impact on precipitation, but the device should be much more powerful.

"Ion particles serve as nuclei of condensation, which attract molecules of water... In other words, it [air moisture] become condensed more effectively and falls down faster," the source said.