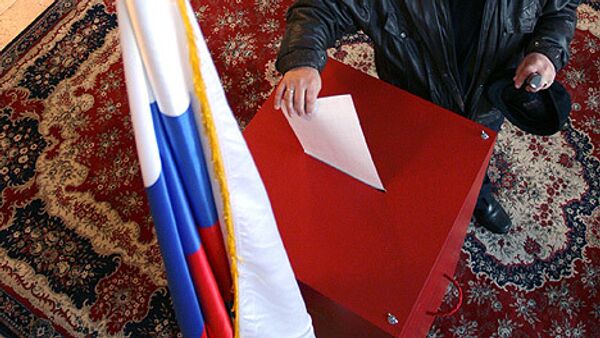 The October 11 polls, which the ruling United Russia party won by a landslide, saw wide-scale allegations of fraud.

"We have reached the conclusion that protest actions are the most effective measures. That's why we have made the decision to hold an all-Russian protest action across Russia on October 22," Vadim Solovyov said, adding that 5,000-7,000 people were expected at the Moscow event.

On October 14, three opposition parties, including the Communists, left the State Duma in protest against the polls. Two of the parties have since returned to parliament, and the Communists announced on Wednesday they would also end their boycott.

The Communists have demanded that Vladimir Churov, chairman of the Central Election Commission, and Leonid Markelov, governor of the Volga Republic of Mari El, resign over alleged election fraud.

The opposition has demanded a meeting with President Dmitry Medvedev to discuss electoral violations. The meeting, initially scheduled for October 27, could be held this week.

The Liberal Democratic Party has demanded a nationwide recount and State Duma Speaker Boris Gryzlov's resignation. It also said the polls in Moscow, Central Russia's Tula Region and the Volga Republic of Mari El should be declared invalid, and a new vote scheduled for March 2010.

The Congress of Local and Regional Authorities of the Council of Europe said Wednesday it was concerned over claims of voting procedure violations at the elections and that it regrets it was not invited to observe the vote.