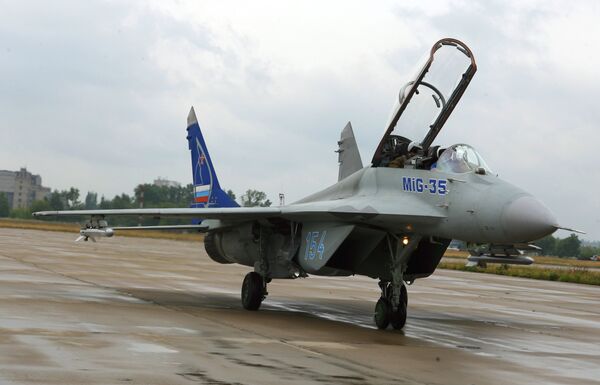 © Илья Питалев
/
Go to the photo bank
Subscribe
Production of MiG-35 multirole fighters offered for sale to India cannot start before 2013 or 2014, a Russian aircraft maker said on Thursday.

"We have begun testing the MiG-35 fighter for the Indian tender," said Alexander Karezin, general director of the Sokol company based in Nizhny Novgorod.

Six major aircraft makers - Lockheed and Boeing from the United States, Russia's MiG, which is part of the UAC, France's Dassault, Sweden's Saab and the EADS consortium of British, German, Spanish and Italian companies - are in contention to win the $10 billion contract for 126 light fighters to be supplied to the Indian Air Force.

Sokol earlier said that the first two MiG-35 aircraft would be delivered to India in August for test flights prior to the award of the tender. In late 2009, Russia will conduct a series of flight tests with live firing for an Indian Air Force delegation at one of the testing grounds on the Russian territory.

Moscow said if MiG-35 wins the tender, Russia is ready to transfer all key technology to India's Hindustan Aeronautics Ltd. and provide assistance for the production of the aircraft in the country.