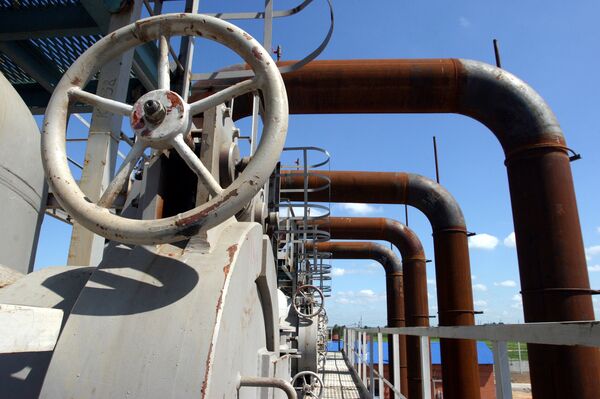 /
Go to the mediabank
Subscribe
International
India
Africa
Russia's Gazprom confirmed on Thursday that Ukraine has paid in full for natural gas pumped into its storage facilities in July.

MOSCOW, August 6 (RIA Novosti) - Russia's Gazprom confirmed on Thursday that Ukraine has paid in full for natural gas pumped into its storage facilities in July.

Ukrainian Prime Minister Yulia Tymoshenko said on Wednesday that Kiev had transferred $605 million to Gazprom's accounts, and said Ukraine would continue to effect payments on schedule for gas supplies.

The European Commission announced in late July that it had reached an agreement with Ukraine on the modernization of the country's gas sector, and on the readiness of international financial institutions to provide credit to Kiev to ensure timely payments for Russian gas, and prevent disputes that could interrupt supplies to Europe.

The European Bank for Reconstruction and Development (EBRD), the European Investment Bank and the World Bank are to release a $1.7 billion loan to Ukraine to modernize its gas sector and facilitate payments for gas purchases, a European diplomatic source told RIA Novosti earlier this month.

Ukraine had earlier sought a loan of over $4 billion from the EU to pump gas into its underground storage facilities.

Russia, which supplies around one quarter of Europe's gas, briefly shut down supplies via Ukraine's pipeline system at the start of the year during a dispute over Kiev's debt.

The conflict was resolved in January, when Russian Prime Minister Vladimir Putin and his Ukrainian counterpart Tymoshenko agreed deals on deliveries to and gas transit through Ukraine for 2009.

The ex-Soviet state transits around 80% of Russia's Europe-bound gas.