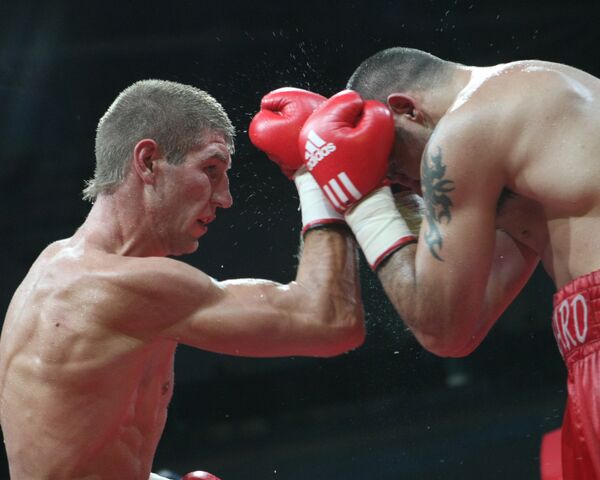 Former undisputed cruiserweight champion David Haye of Britain has canceled his September 12 bout with Ukraine's Vitali Klitschko and signed up for a bout with Russia's Nikolai Valuev instead, the FightNews.com reported on Thursday.

MOSCOW, July 23 (RIA Novosti) - Former undisputed cruiserweight champion David Haye of Britain has canceled his September 12 bout with Ukraine's Vitali Klitschko and signed up for a bout with Russia's Nikolai Valuev instead, the FightNews.com reported on Thursday.

"I am thrilled to announce that my dream of becoming world heavyweight champion will be realized on November 7, when I challenge the tallest and heaviest champion of all time, Nikolai Valuev," the website reported quoted Haye as saying.

The 35-year-old Valuev (50-1, 34 KOs) holds the WBA heavyweight title, which he last retained in December 2008 in a controversial split decision against four-time world champion Evander Holyfield.

Haye (22-1, 21 KOs) was initially scheduled to fight on June 20 against Wladimir 'Dr. Steelhammer' Klitschko (53-3, 47 KOs), but the Briton pulled out of the bout due to an arm injury. Media reports announced that he later scheduled a bout against his older brother Vitali for September 12 in Germany.

"There were reports in the German press that I had signed to fight Vitali Klitschko in September, but those reports were never true," Haye said, adding that the Klitschko brothers treated him with disrespect.

"The level of disrespect they have shown me throughout has left me feeling insulted," he said.

At a news conference with Wladimir in April, the Londoner wore a t-shirt depicting himself holding aloft the two decapitated heads of the brothers.

Last December a scuffle broke out in a restaurant when the Briton presented Vitali (37-2, 36 KOs) with a British edition of Men's Health magazine, displaying a photo of Haye posing with the decapitated head of Wladimir.

However, Haye did not rule out possible bouts with Klitschkos in the future.

"Once I have snatched Valuev's title, I will be happy to battle out heavyweight supremacy with the Klitschkos, but only on equal and fair terms," he said adding that "I only hope the Klitschkos still want to fight me after I have slayed 'The Beast'."