Russia set to build up its naval facilities in Syria 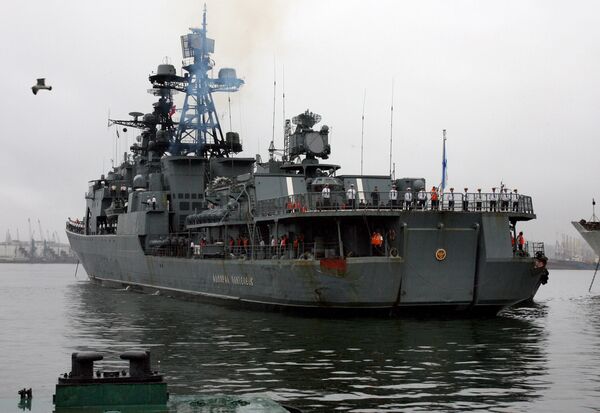 The Russian Navy will expand and modernize its Soviet-era naval maintenance site near Tartus in Syria to support anti-piracy operations off the Somali coast, a high-ranking navy source said on Monday.

MOSCOW, July 20 (RIA Novosti) - The Russian Navy will expand and modernize its Soviet-era naval maintenance site near Tartus in Syria to support anti-piracy operations off the Somali coast, a high-ranking navy source said on Monday.

About 50 naval personnel and three berthing floats are currently deployed at the Tartus site, which can accommodate up to a dozen warships.

"Two tug boats from the Black Sea Fleet will deliver a new berthing float to Tartus," the source said.

The Navy maintenance site near Tartus is the only Russian foothold in the Mediterranean. Russian navy commanders have long been calling for the expansion and modernization of the Tartus base.

"The base in Tartus will provide all necessary support for the Russian warships which will be engaged in protecting commercial shipping around the Horn of Africa," the official said.

According to the Russian Navy, the naval base in Syria significantly boosts Russia's operational capability in the region because the warships based there are capable of reaching the Red Sea through the Suez Canal and the Atlantic through the Strait of Gibraltar in a matter of days.

Col. Gen. Anatoly Nogovitsyn, the deputy chief of the General Staff of the Russian Armed Forces, said in January that the General Staff had backed the Navy command's proposal to develop naval infrastructure outside Russia.

Russia has reportedly been involved in talks to establish naval facilities in Yemen, Syria and Libya, among other countries in the Mediterranean.