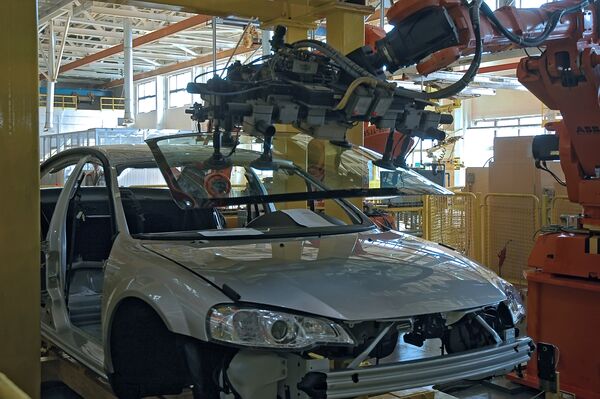 © Mihail Beznosov
/
Go to the photo bank
Subscribe
The Russian carmaker GAZ could start producing Opel cars within nine months if a consortium of investors taking over the German auto producer give their backing, GAZ said on Monday.

NIZHNY NOVGOROD, June 1 (RIA Novosti) - The Russian carmaker GAZ could start producing Opel cars within nine months if a consortium of investors taking over the German auto producer give their backing, GAZ said on Monday.

The German government and Magna International, backed by Russia's Sberbank and GAZ, reached a deal early on Saturday that will see the consortium take over Opel, part of U.S. car giant General Motors.

"If the consortium makes a decision on the production of cars in Russia in cooperation with GAZ Group, our company as an industrial partner could arrange production using the capacity of its new technological complex in Nizhny Novgorod," GAZ said in a statement.

The new complex in Nizhny Novgorod in the Volga area was built in 2008 in cooperation with Chrysler and Magna, and is currently rolling out Volga Siber cars.

"The technological level of the production facility corresponds to top world standards, and the level of automation is 85%. This facility is fitted out with well-provided infrastructure and employs highly skilled personnel who have undergone training at Magna," the statement said.

Arrangements for Opel car production will not require financial investment from GAZ as its flexible production facility allows for the production of cars of any class, the statement said.

Russian Finance Minister Alexei Kudrin said on Monday that the government approves of the deal for the acquisition of Opel, but will not provide budget funds for the purchase of the German carmaker's shares or for its financial recovery.

Russia's Prime Minister Vladimir Putin also extended his support on Monday to the Opel-Sberbank deal and said it should be included into Russia's car making strategy.

"It is important to us how the deal, if it is concluded, will affect Russian consumers, and domestic producers. I mean by this companies with a foreign capital or with 100% foreign investment," Putin said at a meeting with Sberbank head German Gref.