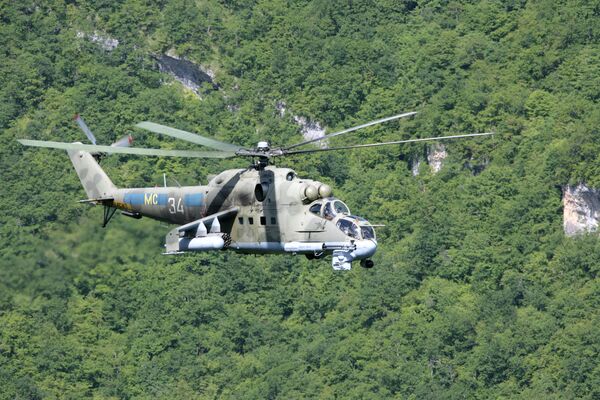 © RIA Novosti . Iliya Pitalev
/
Go to the photo bank
Subscribe
Sri Lanka has ordered a number of military transport helicopters and other weaponry from Russia, the country's defense secretary said in an exclusive interview with RIA Novosti.

COLOMBO, May 15 (RIA Novosti) - Sri Lanka has ordered a number of military transport helicopters and other weaponry from Russia, the country's defense secretary said in an exclusive interview with RIA Novosti.

"I have managed to reach an agreement with Russia on a loan to purchase military equipment, primarily helicopters for the air force, and other weaponry," Gotabhaya Rajapaksa said, adding that the helicopters had been already ordered.

Rajapaksa did not specify the amount of the deal or the number of helicopters, but said they were needed in the first place "to transport military personnel."

"We will need them in the future. We are already using [Russian-made] Mi-17 and Mi-24 helicopters, and we need more," the official said.

He added that Sri Lanka was willing to develop stronger military ties with Russia.

"We would like to bring our relations to the level where we could share [combat] experience," Rajapaksa said.

One of the areas of military cooperation could be Russia's help in mine clearing in the north of the country.

Shi Lanka's government has long been involved in fighting against Tamil Tigers, a militant group based in northern Sri Lanka. Founded in 1976, the group has actively waged a secessionist campaign that seeks to create an independent Tamil state in the north and east of Sri Lanka. More than 80,000 people have died in the conflict since 1983.

Government forces are currently involved in an offensive to wipe out the remaining Tamil Tiger rebels. Sri Lanka has rejected international calls for a ceasefire, and the UN says over 6,000 civilians have died in fighting since January. Thousand of civilians, some estimates say up to 50,000, have also been cut off by the fighting and are trapped in jungle areas with little access to food or water.