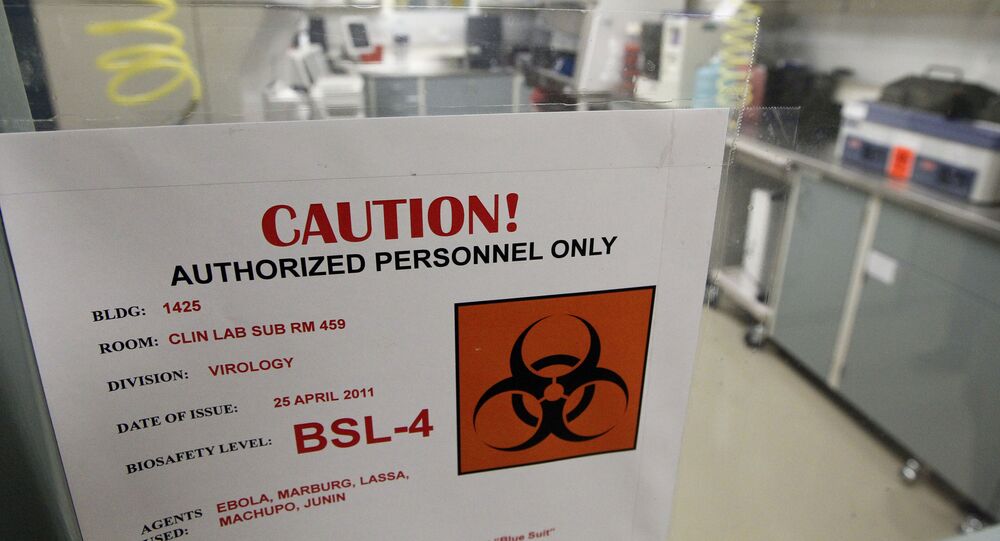 Chinese scientists sequenced the genome of SARS-CoV-2 in early January 2020 and by March of that year had “irrefutably” concluded the virus was not of human design. Since then, the goalposts have shifted repeatedly in an attempt to keep laboratory escape a viable theory, despite no evidence to support the continued supposition.

Amid a flurry of statements by US health figures suggesting a deeper probe of the Wuhan Institute of Virology is warranted as part of the hunt for the origins of SARS-CoV-2, the virus that causes COVID-19, China’s state media has shot back, suggesting that the top US biolab at Fort Detrick should also be investigated.

“If they see the ‘lab leak’ theory as one of the directions of the investigation, the Wuhan Institute of Virology should not be the only one included,” the editors of the Global Times, a daily paper published by the Communist Party-owned People’s Daily, wrote on Wednesday.

“Since 2019, the Fort Detrick biolab has shown many signs worthy of attention, and should be included in the first group of targets for investigation. In addition, the US has also built an astonishing number of biolabs in Asia, and investigating them is an urgent project that must be added in the COVID-19 origins-tracing,” the editorial notes.

“If the efforts of virus origins-tracing focus on science rather than politics, expanding the scope of the investigation is completely logical and rational. However, the US is repeatedly using its and its allies' opinion tools to draw attention to Wuhan, especially to the lab there. It is clearly a political maneuver.”

US Biolab Has Leaked Before

Based in northern Maryland, Fort Detrick was once the center of the Pentagon’s bioweapons program and today houses several agencies focused on biodefense and research into some of the world’s deadliest diseases, including smallpox, anthrax, and viral hemorrhagic fevers like ebola.

Fort Detrick has been shut down several times over the years, including in 2009 when the Army Medical Research Institute of Infectious Diseases was found to be storing hazardous bacteria, viruses and toxins not included in its inventory, and again in 2019, when the US Centers for Disease Control and Prevention (CDC) issued a “cease and desist” order after finding the lab had inadequate safety measures for waste disposal.

In addition, the FBI’s prime suspect for the 2001 anthrax attacks that followed the September 11 terrorist attacks and killed five people, Bruce Ivins, was a senior biodefense researcher at Fort Detrick. The FBI never charged Ivins before his apparent suicide in 2008, but after his death the bureau released a report on their investigation showing Ivins had stolen the anthrax spores from Fort Detrick.

In late March, the World Health Organization (WHO) released a report on its international trip to Wuhan to share data on COVID-19 in an attempt to better pinpoint the origins of the coronavirus that has killed nearly 3.5 million people since late 2019. Of the four possible origins the team looked at, a leak from the Wuhan virology lab was judged the least likely, although the scientists did not entirely dismiss it since they couldn’t disprove it. They suggested a zoonotic source was more likely, and also floated a fifth possibility: that it was brought to Wuhan by military athletes in the city for international games the October before the outbreak began.

However, their report has done little to blunt the unfounded accusations that SARS-CoV-2 escaped from the lab, either as a bioweapon created by Chinese scientists or as a virus under research that the Chinese government had kept secret.

As Sputnik has reported, the theory first sprang from an uninvolved Hong Kong scientist in early 2020 whose ideas were given a platform by right-wing American ideologues with an anti-China agenda, and then-US President Donald Trump began using the “lab escape theory” to deflect blame from his own administration’s response once the virus started killing tens of thousands of Americans later that spring. The angle played into other anti-Chinese rhetoric intended to demonize the socialist Asian nation, which could soon supplant the US as the world’s premier economic power and which the Pentagon has identified as a “near-peer competitor” and the US’ greatest rival in the 21st century.

The WHO scientists have rejected claims that they lacked adequate access to the Wuhan biolab’s data, noting the US would never allow the kind of access to its own research that it has demanded of the Chinese.

US Experts Second-Guess WHO

More recently, US Health and Human Services Secretary Xavier Becerra on Tuesday called for the WHO to begin a deeper investigation of COVID-19’s origins, saying it “must be launched with terms of reference that are transparent, science-based, and give international experts the independence to fully assess the source of the virus and the early days of the outbreak.”

While a second phase of the investigation is certainly warranted, since an origin has not yet been found, the Global Times notes that due to his word choice, “it is quite clear that Becerra was aiming at China.”

The day prior, Dr. Anthony Fauci, the director of the National Institute of Allergy and Infectious Diseases (NIAID) at the US National Institutes for Health (NIH), told a forum at the Poynter Institute he was “not convinced” that SARS-CoV-2 has a natural origin.

“I think we should continue to investigate what went on in China until we continue to find out to the best of our ability what happened," Fauci added. "Certainly, the people who investigated it say it likely was the emergence from an animal reservoir that then infected individuals, but it could have been something else, and we need to find that out. So, you know, that's the reason why I said I'm perfectly in favor of any investigation that looks into the origin of the virus.”

However, Fauci’s words were not spoken in a vacuum. On Sunday, the Wall Street Journal, which has long given a platform to the “lab leak” theory’s proponents, published a story citing “a previously undisclosed US intelligence report” and “a State Department fact sheet, issued during the final days of the Trump administration,” claiming that in November 2019, three researchers at the Wuhan virology lab checked into a hospital “with symptoms consistent with both Covid-19 and common seasonal illness.”

However, the article notes that the WHO team knew about the cases, with team member Marion Koopmans, a Dutch virologist, telling NBC back in March that “it was certainly not a big thing.”

“There were occasional illnesses because that’s normal,” she said. “There was nothing that stood out.”

She further noted that the Chinese researchers tested negative for COVID-19 - a point Chinese Foreign Ministry spokesperson Zhao Lijian reiterated in Monday comments to the press.

On Wednesday, US President Joe Biden ordered an intelligence report in 90 days’ time on the origins of COVID-19. He noted that two “elements” of the intelligence community “lean” toward the virus jumping from an animal host into humans, another “element” “leans” toward its introduction into humans being a laboratory accident, with each group expressing “low or moderate confidence” in their conclusions.

“[T]he majority of elements do not believe there is sufficient information to assess one to be more likely than the other,” Biden added.