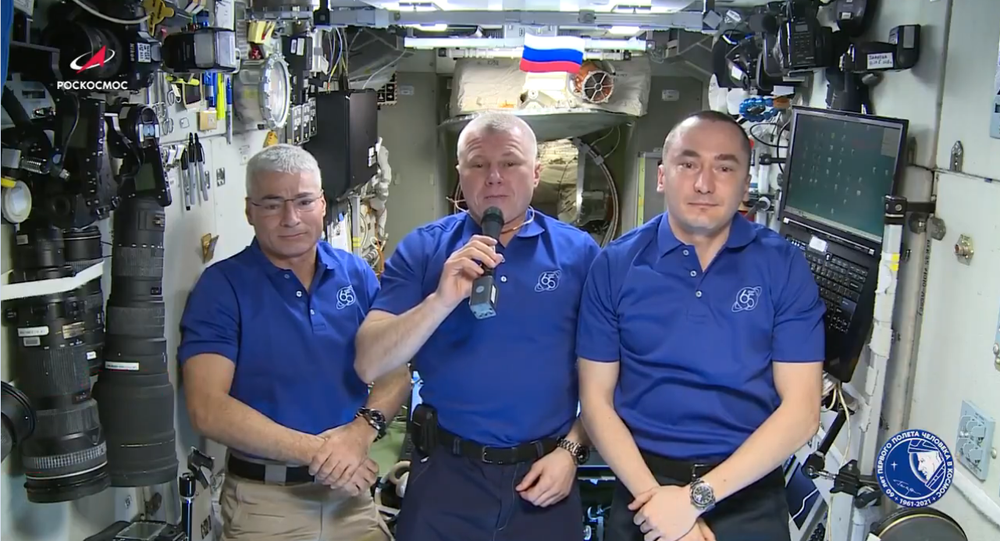 MOSCOW (Sputnik) - The crew of the International Space Station (ISS) has congratulated everyone with the 76th anniversary of victory in World War II via a video address released by Russian space agency Roscosmos.

"Today, on May 9 2021, we - [Russian cosmonauts ] Oleg Novitskiy, Pyotr Dubrov and [US astronaut] Mark Vande Hei send festive greetings to all the inhabitants of planet Earth on the occasion of the Great Victory Day from the International Space Station," Novitskiy said in the video address.

Dear friends, from the International @Space_Station we send you, our fellow citizens, and all the inhabitants of planet Earth festive greetings on the occasion of the Great Victory Day!

We wish you and all humanity a peaceful sky, good health, prosperity and joy! Happy Holidays! pic.twitter.com/npQfMi8wQk

​He stressed that the heroic efforts of WWII soldiers and front workers and the memory of war victims will always be sacred, while May 9, 1945 will remain one of the main events of the 20th century that laid the basis for the peaceful development of human civilization.

"The ISS is a great historical example of international cooperation. And we are honored to be residents of this world-class research laboratory," Mark Vande Hei said, speaking in Russian.

A Victory Day parade will be held on Sunday in Moscow with the participation of over 12,000 servicemen and the involvement of more than 190 units of military equipment, as well as 76 planes and helicopters. Bart Gorman, the deputy chief of the US mission in Moscow plans to attend the Victory Day military parade in the Russian capital, according to a US embassy spokesperson.

In a congratulatory statement released by the Russian Interior Ministry on the occasion of the 76th anniversary of the Victory in the Great Patriotic War, Russian Interior Minister Vladimri Kolokoltsev and Chairman of the Investigative Committee Alexander Bastrykin wished good health and well-being to the war veterans, warning against the falsification of historic events.