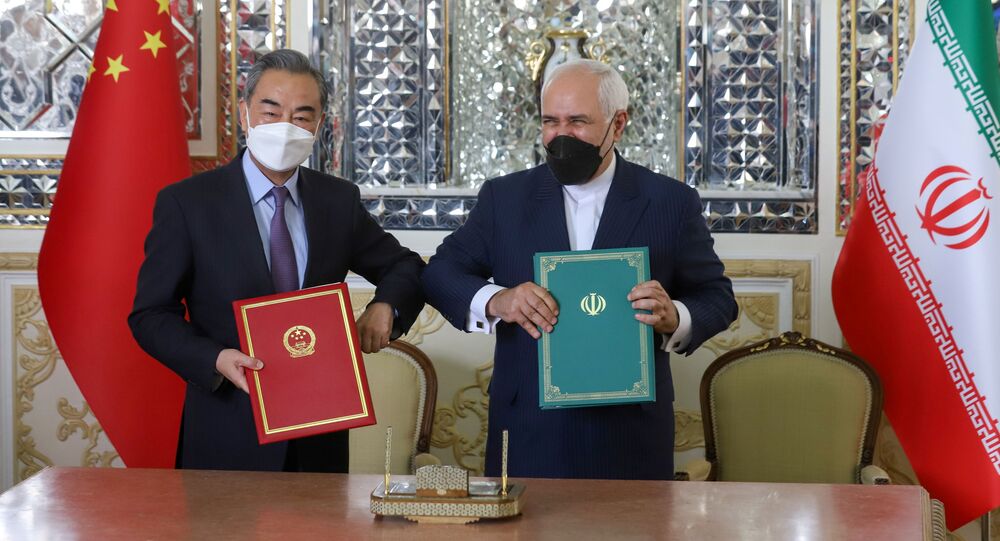 Iranian Foreign Minister Mohammad Javad Zarif has presented "some points" of a landmark cooperation deal that was recently concluded between Beijing and Tehran.

In a message posted on his Instagram account on Thursday, Zarif underscored that the Sino-Iranian Comprehensive Strategic Partnership focuses on a "practical promotion" of bilateral ties and provides "a roadmap and long-term horizon" toward such relations.

According to him, the accord paves the way for full-blown collaboration between the two sides in the fields of politics, economy, trade, culture, defence, and security.

The Iranian foreign minister added that the agreement envisages the principles of "mutual respect and the pursuit of common interests in a win-win manner regarding bilateral, regional, and international relations".

"This document is not a contract and a convention. It creates no obligation for either party, rather, it paints a perspective of [Beijing-Tehran] relations", Zarif pointed out.

He went on to explain that the deal "does not assign any region or even a location and does not create any exclusive rights in any field", noting that "the deployment of military force is not foreseen in this document and there is no possibility for taking over a base".

The top Iranian diplomat also noted that in terms of bilateral economic ties, the agreement stipulates both sides' cooperation in oil, mining, and energy-related sectors, as well as Iran's contribution to China's Belt and Road Initiative.

As far as the cultural field is concerned, the document calls for promoting tourism, media, non-governmental organisations, and academic cooperation, among other things, according to Zarif.

The remarks come after the Iranian foreign minister hailed the signing of the agreement last Saturday, lauding the deal as a "historic 25-year strategic roadmap".

Zarif added that he and Chinese Foreign Minister Wang Yi had an "excellent exchange on expansion of global, regional, and bilateral cooperation in the context of our comprehensive strategic partnership".

He was echoed by Iranian President Hassan Rouhani, who expressed gratitude for Beijing's support of Tehran in the international arena in the face of unilateral US sanctions against the Islamic Republic.

US media largely branded the Beijing-Tehran deal as a direct challenge to Washington, with The Wall Street Journal citing it as an example of the two countries' "defiance of US attempts to isolate Iran", and The New York Times suggesting that it "could deepen China's influence in the Middle East and undercut American efforts to keep Iran Isolated".

Bloomberg, in turn, called the agreement "a challenge to US President Joe Biden's administration as it sets about trying to rally allies against China".

© AP Photo / Ebrahim Noroozi
China and Iran Now Close Partners After 'Game Changer' Investment Pact
Biden's 2020 campaign promises to get Washington back into the 2015 Iran nuclear deal, also known as the Joint Comprehensive Plan of Action (JCPOA), have fallen flat amid Tehran's insistence that it will not roll back its uranium enrichment activities unless the US drops its illegal sanctions first.

In May 2018, then-US President Donald Trump announced Washington's unilateral withdrawal from the nuclear deal, also reinstating economic sanctions against Iran, who exactly a year later started to scale down its JCPOA obligations.