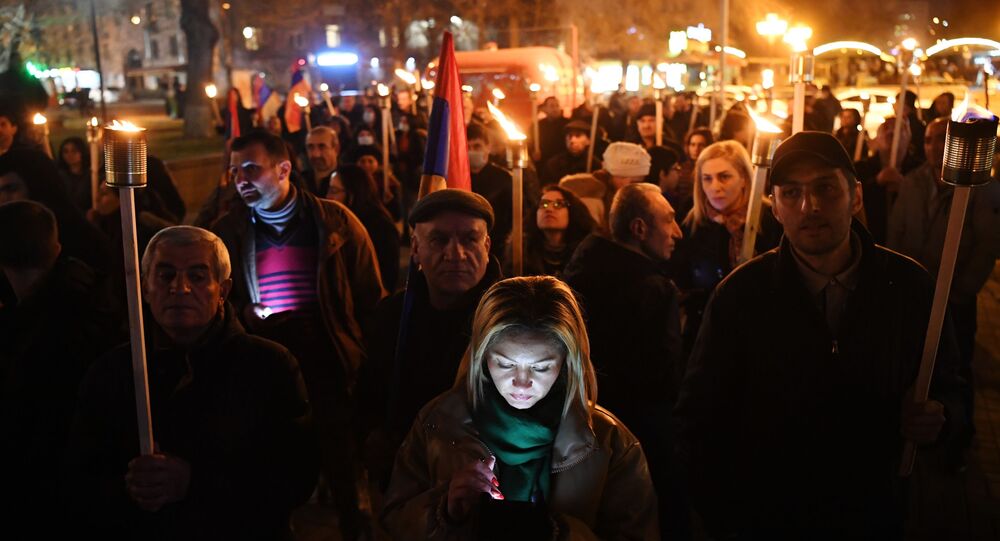 Tensions in Armenia have intensified since Prime Minister Pashinyan and the country's military locked horns in the wake of a string of dismissals of top military officials ordered by Pashinyan. The military has now called for Pashinyan's resignation, which the prime minister regards as "a coup attempt".

Opposition supporters have broken into a government building in central Yerevan, a Sputnik correspondent reported on Monday.

The opposition staged a protest action in the lobby of the building, which reportedly hosts several ministeries.

They shouted anti-Pashinyan slogans and called on employees to take no part in the rallies in support of the prime minister.

After several minutes, the protesters left the building. A video of the public action was caught on camera and has since been uploaded on social media.

Armenia became mired in a political crisis after the military called for Pashinyan's resignation last week in response to a string of dismissals in the military. The prime minister sacked top officials after the deputy army chief slammed Pashniyan's comments about the alleged inefficiency of Russian-made Iskander systems during the Karabakh conflict. This prompted the military to call for Pashinyan to step down.

The protests also come amid a broader discontent of the opposition with the prime minister in the wake of a Russia-brokered ceasefire concluded in November that put an end to the Nagorno-Karabakh conflict. Under the agreement, a number of Nagorno-Karabakh's districts were ceded to Azerbaijan.