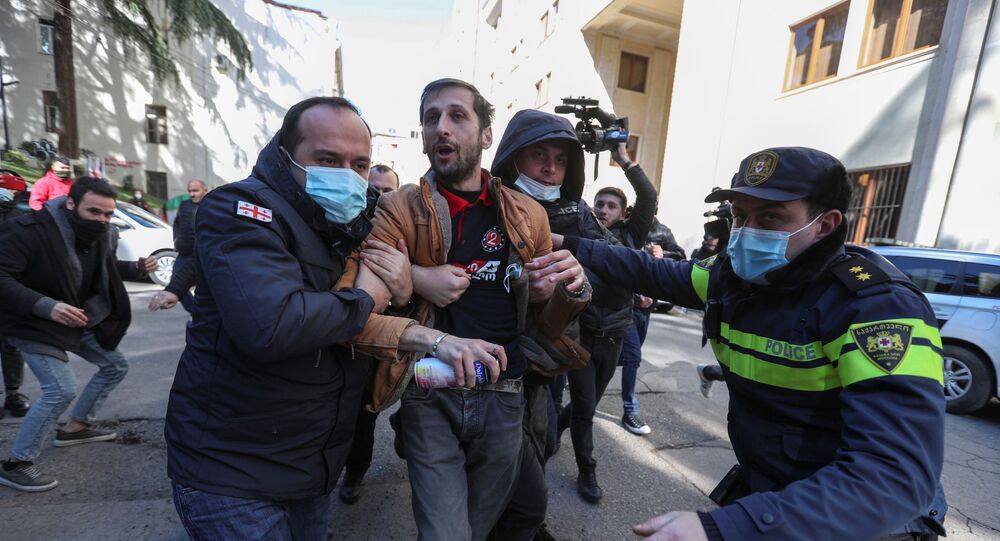 TBILISI (Sputnik) - Speaker of the Georgian parliament Archil Talakvadze on Tuesday urged the opposition to engage in the legitimate political process and ruled out any discussions on a snap parliament election.

Earlier in the day, the representatives of the Georgian opposition, former first Deputy Foreign Minister Giga Bokeria and former chairwoman of the Georgian Parliament Nino Burjanadze, warned that they would hold protests against the results of the October general election to seek a fresh ballot, following the recent detention of the leader of the National Movement (UNM) party, Nika Melia.

"I appeal to the healthy opposition with a call to return to a normal political process, the parliamentary process, as it was decided by the people in the 2020 election. The next step towards the de-escalation of the processes will be participation in parliamentary processes. An early parliament election can not and will not be a subject for discussion," Talakvadze told journalists.

The spokesman stressed that the Georgian opposition should actively engage in the activities of the country's parliament.

Democracy and political balance stand on the rule of law. Refusal to participation, violence against institutions and polarization go against Georgia's future - opposition should avoid this agenda and engage in the Parliament. It is time for pragmatic politics. pic.twitter.com/HOIHOAY6kF

​The spokesman added that Georgia's leadership was ready to negotiate with the opposition to settle the political crisis, but refused to speak with the UNM, calling it a radical power.

Prior to his detention on early Tuesday, Nika Melia was briefly arrested for leading riots and anti-Russian protests back in June 2019 and later released on 30,000 Georgian lari ($9,063) bail. He was forced to wear a monitoring bracelet but removed it publicly during another wave of opposition protests, which erupted in November 2020 in non-recognition of the general election results. This prompted the court to revise the conditions of Melia's release and impose a new bail, totaling 40,000 lari. The UNM chairman has refused to pay the bail.

On February 18, then-Prime Minister Giorgi Gakharia announced his resignation, citing his disagreement with the team members over Melia, whom the Tbilisi court ordered to arrest for failing to pay bail. Gakharia said the detention of the opposition figure could have caused an escalation of the already tense political situation in the country.