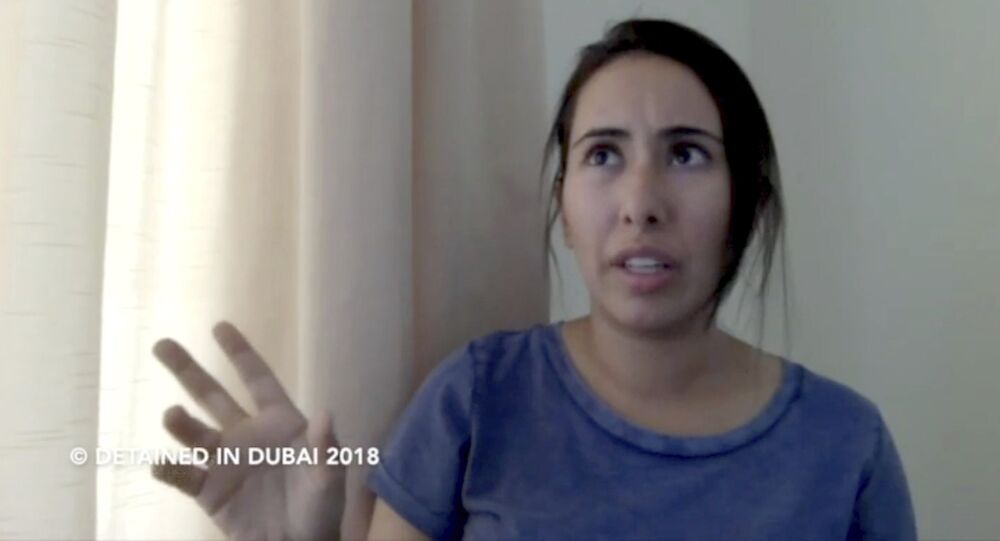 Guards of ‘Captive’ Dubai Princess Latifa Did Their Best to ‘Break Her Spirit’, Lawyer Says

The princess, who says she is being held by her father, Dubai's ruler Sheikh Mohammed bin Rashid Al Maktoum, has not been heard from in six months, raising concerns about her health and wellbeing.

Guards put a bag of razor blades in Princess Latifa’s room and handed her an electronic stopwatch to chart every single passing day in her “jail villa” in a bid to “break her spirit”, the UAE princess’s British lawyer David Haigh shared with The Sunday Express, adding that she had first been held captive in a remote desert jail called Al Awir.

Her current confinement, where the 35-year-old daughter of Dubai's ruler Sheikh Mohammed al-Maktoum is understood to have been living since May 2018, sits beside a well-known tourist spot, the seven-star Burj Al Arab hotel. There, the lawyer and Free Latifa co-founder said, she will reportedly have to stay for another year, being guarded by “30 or so police”.

The lawyer went on to detail how he had to call NHS 111 for advice after he accidentally learned that Princess Latifa, who stopped responding to friends' text messages six months ago, felt unwell last year due to suspected coronavirus, but was ostensibly denied medical assistance.

The comments came as Latifa’s best friend, Tina Jauhiainen, dismissed claims from Dubai’s ruling family that the princess was being “cared for at home”, accusing them of imprisoning her. The woman said she was accompanying the princess during her attempt to escape back in 2018, insisting that Latifa is now in captivity.

“It's ridiculous that her family think they can put out this kind of statement and provide no actual proof of life. I'm shocked and upset that this is their official response”, Jauhiainen shared, saying she’d love to see tourists “boycott Dubai” in revenge.

Earlier this week, Princess Latifa released a video, broadcast by the BBC, in which she described in detail how her dramatic 2018 attempt to escape to India’s west coast via Oman failed as she was reportedly tracked down and captured by her father’s commandos.

In the video, Latifa accused the sheikh of jailing her for three years in 2002, when she also tried to escape, and again in 2018.

“I'm a hostage. And this villa has been converted into a jail. All the windows are barred shut”, she said in the heartfelt video, noting she fears for her life.

“There's five policemen outside and two policewomen inside. I can't even go out to get fresh air. So basically, I'm a hostage”, she continued.

Neither the UAE government nor Sheikh Mohammedal-Maktoum has commented on the footage, but in 2018, the UAE said that Princess Latifa was "at home and living with her family in Dubai". To prove it, they published photographs of her having lunch with former Irish President and UN High Commissioner for Human Rights Mary Robinson.

This time, the UAE Embassy in London said, citing the family, that “her Highness is being cared for at home, supported by her family and medical personnel", adding that the video of the princess that circulated earlier in the media and her alleged predicament were "not reflective of the actual position".

Shortly after the release of the “secretly” recorded video, Britain's Foreign Secretary Dominic Raab weighed in on the matter, demanding that the 71-year-old ruler of Dubai provide proof that his daughter Latifa, one of 30 children he has with his six wives, is "alive and well".

The UN, for its part, asked the United Arab Emirates for evidence that the princess was safe and sound. Liz Throssell, spokeswoman for the UN Office of the High Commissioner for Human Rights, told an online briefing in Geneva that they had “raised our concerns about the situation in light of the disturbing video evidence that emerged this week” and asked for “proof of life”.