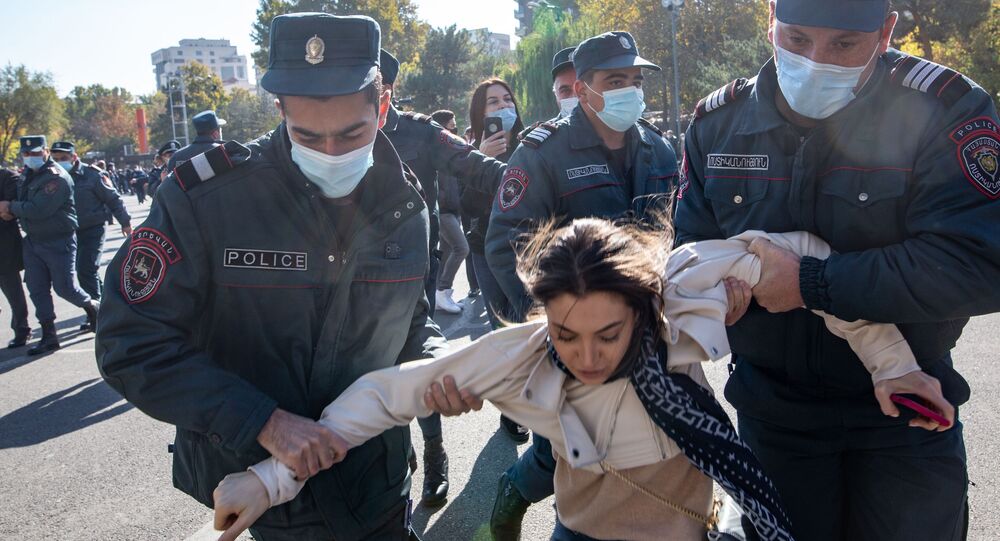 Around 130 Arrested After Clashes With Police in Armenia's Capital - Videos

Earlier in the day, a Sputnik correspondent reported that several dozen people were detained in the Armenian capital, Yerevan, at a rally organised by 17 opposition parties protesting against the prime minister's decision to sign a ceasefire deal with Baku.

According to the Armenian police, around 130 people have been arrested during the opposition protest in the country's capital, Yerevan.

Earlier in the day, a Sputnik correspondent reported that Armenian opposition had clashed with police in central Yerevan during the ongoing protest.

Law enforcement officers were separating protestors from the rally's organisers as they tried to arrest the ringleaders.

Before the clashes, police and special operations units were already gathering in the city centre, according to the reporter.

According to Shake Isayan, a politician from the opposition party, Prosperous Armenia, the authorities have shut off roads towards Yerevan because of the protest.

At the same time, according to the Sputnik correspondent police have stopped mass arrests of the protesters.

Baku and Yerevan have agreed to stop all hostilities in Karabakh starting on Tuesday. Each country will remain at the positions it was holding at that time, the prisoners are to be exchanged, and Russian peacekeepers are to be stationed along the contact line. Several planes with Russian forces have already arrived at the site.