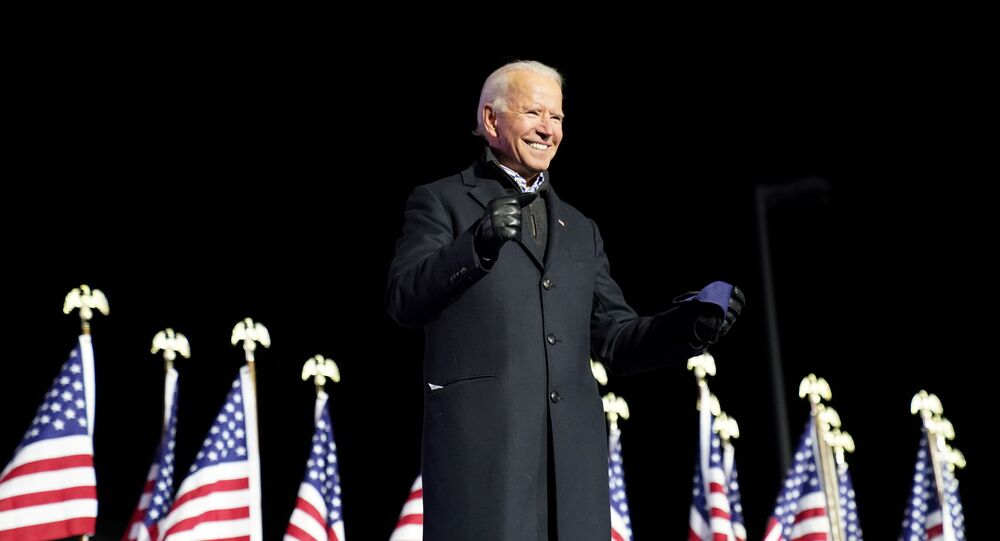 Palestinians Hope for Biden but Prepare Themselves for Worst

The Democratic candidate is not going to right all the wrongs of his predecessor, believes a Ramallah-based expert, but he will likely to take a more mild approach towards the Palestinians and help them to overcome their economic difficulties.

For Palestinians in the West Bank and the Gaza Strip, the upcoming race for the White House is easily regarded as the most important event in recent years.

As the world's eyes are set on Washington in anticipation of the elections' outcome, Abdul Sattar Qassim, a Ramallah-based political expert, says Palestinians have their fingers crossed and are hoping to see President Donald Trump leave office.

During his four years at the White House, Trump has managed to severely harm the international standing of the Palestinians.

The recognition of Jerusalem as Israel's capital was only one of those steps that pulled the rug out from under the Palestinians' feet. Other moves were to follow.

Washington soon acknowledged the legality of Jewish settlements in the West Bank, shut down a Palestinian mission in the capital, supported Israel's initiative to extend its sovereignty over parts of the West Bank, and pressed ahead with plans to isolate the PA by forging normalisation agreements between the Jewish state and a number of Muslim nations.

Trump Is a Catastrophe?

Due to his overwhelming support for Israel and Prime Minister Netanyahu, Qassim calls Trump's potential re-election a "catastrophe" that would further weaken the Palestinians on the international arena.

It would also deal them a severe financial blow, he contends. The fiscal situation of the Palestinian Authority has never been stable, but under the Trump administration, their economic woes have only gotten worse.

In 2018, Washington cut more than $200 million in aid to the Palestinians. The outbreak of the coronavirus has also harmed the PA economically, while donations from the rich Gulf states have shrunk by 85 percent, leaving the authorities in Ramallah clamouring for financing.

"Trump's term in office has been the worst for the Palestinians and if he gets re-elected he will continue with his crazy policies and drive us into deeper economic and political crises," believes the expert.

Although polls paint the current US president in a gloomy light, Palestinians are still bracing themselves for a worst-case scenario and trying to overcome their own differences - triggered by historic disagreements and feuds -- to stay united in the face of the potential challenge.

In late September, representatives of Fatah and Hamas, the two rival Palestinian groups that have been at odds since 2007 following the violent takeover of Gaza, met in Turkey for reconciliation talks. Although differences still exist, the factions did decide to join efforts in their battle against what could be Trump's second term in office.

Will Biden Be Any Better?

However, Palestinians are not setting their hopes too high on Biden either, especially given "America's general backing for Israel" and considering the "unshakable" support the Democratic candidate has expressed for the Jewish state.

Their reservation is understandable. Biden did promise to restore the diplomatic ties cut by the Trump administration and he did vow to stick to the two-state solution, rejecting Israel's plans to expand to parts of the West Bank.

At the same time, Trump's major decisions, believes the expert, will largely be left unaltered.

Such will be the case with the US embassy in Jerusalem, which will remain in the disputed city even if Biden gets elected. Most probably, a Biden administration would fail to recant the decision to acknowledge the legality of the Jewish settlements in the West Bank.

Nothing will be done with Israel's expansion activity in the West Bank either, and Qassim believes Biden will not derail the process of alienating the Palestinians, choosing to stick to Trump's policy of bridging the gap between Israel and the Muslim world at the expense of the PA.

"Palestinians are likely to get into a deeper economic abyss in the upcoming months and years. The US under Biden will probably help to overcome these hardships but that assistance will always come at a price."

© REUTERS / Tom Brenner
Trump's Better for Israel, But Biden's Election Won't Be a 'Disaster', Ex-Diplomat Says
The "price" in question is the resumption of direct negotiations between Israel and the Palestinians, the last round of which took place in 2013 but has failed to produce any tangible results.

If Biden gets elected, he might want to try his luck in that field, where many have failed, and Qassim believes he will have better chances to succeed than his predecessor.

"For us, the Palestinians, any US president will be better than the current one. Biden will be less biased towards Israel and will not violate all the possible international resolutions. And who knows? Maybe by taking rational and just decisions, he will bring peace to the Middle East."