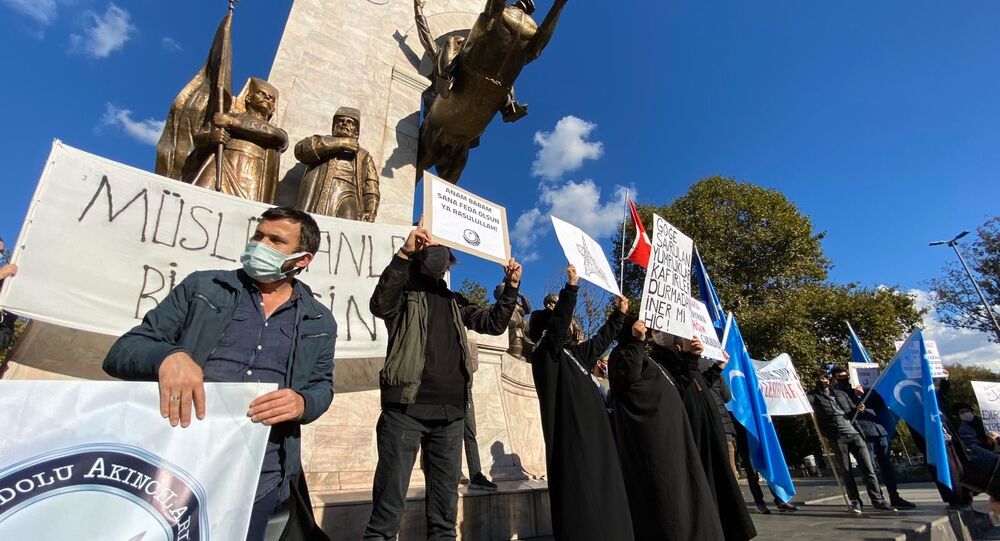 France and the Islamic world have been at loggerheads since President Macron defended the use of cartoons depicting the Islamic Prophet Muhammad as an expression of freedom of speech. The statement came in the wake of the grisly murder of a French teacher who had shown a similar cartoon to his students in October.

Sputnik is live from Istanbul where protesters are gathering to condemn France's policies regarding the use of cartoons depicting the Islamic Prophet Muhammad.

The protesters and are expected to march from Saraçhane Park to the French Consulate at Taksim Square where they will lay a black wreath.

The march comes amid a spat between Turkey and France over cartoons of the Islamic Prophet Muhammad, the holiest figure for Muslim worshippers.

In October, a French teacher, Samuel Paty, was beheaded by a radicalised Muslim teenager after the former had shown a caricature of the Prophet Muhammad in class. The murder prompted President Macron to step up efforts to combat radical Islam. He also expressed support for the continued use of cartoons of the Islamic prophet as a manifestation of freedom of speech, causing an uproar in the Islamic world.