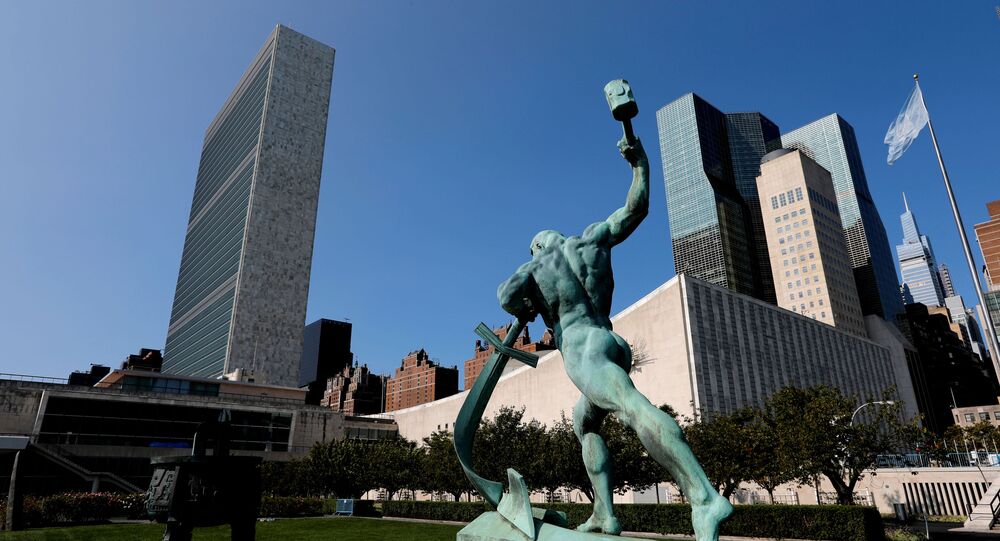 UNITED NATIONS (Sputnik) - The General Debate of the UN General Assembly will start on Tuesday, and for the first time in its history, will be held in a virtual format due to the impact the coronavirus pandemic has had on global travel and in-person diplomacy.

Held on 22-29 September, the annual high-level event will not see a large number of officials gathering in New York City. Usually, the General Assembly week would see 70 to 90 world leaders come to the UN headquarters.

The upcoming General Debate session will be genuinely unique: it will celebrate 75 years since the establishment of the United Nations and witness a record number of high-level officials reflecting in an online format on the issues of global importance. This year's event will allow the participation of the leaders that were, in previous years, unable to come to the UN host country - the United States - due to visa restrictions.

According to the United Nations, 119 heads of state and 54 heads of governments will deliver their remarks via pre-recorded videos submitted by a country’s delegate already in New York. The theme of the high-level debate will be "The Future we want, the United Nations we need: reaffirming our collective commitment to multilateralism – confronting COVID-19 through effective multilateral action."

Russian President Vladimir Putin's video address has already been sent to the United Nations. It will be presented on the first date of the General Debate and will be the seventh to play.

The Russian president planned to participate in the UN General Assembly's anniversary session in-person; however, due to the COVID-19-related travel restrictions, his and other leaders' visits had been cancelled.

Initially, several high-level officials, including Turkish President Recep Tayyip Erdogan, had indicated they would come to New York, according to the President of the General Assembly, Volkan Bozkir. The plans were disrupted by New York State requiring mandatory quarantine for 14 days for every visitor coming from abroad, Bozkir explained.

According to a provisional list of the General Debate speakers, Brazil's President Jair Bolsonaro, whose country traditionally speaks first at the event since 1947, will open the debate.

US President Donald Trump is set to deliver his message, following the Brazilian leader. Trump's in-person participation has been one of the most common questions to be raised at UN noon briefings.

© REUTERS / MIKE SEGAR
A sign sits in the empty North entrance plaza at United Nations headquarters during the 75th annual U.N. General Assembly high-level debate, which is being held mostly virtually due to the coronavirus disease (COVID-19) pandemic in New York, U.S., September 21, 2020

It was expected that Trump would be the only official coming to the UN headquarters in Manhattan, yet, on Thursday, the White House said he would instead send a pre-recorded video address to the world's body.

Erdogan's video message will be played after Trump, followed by the speech by China's President Xi Jinping and the leaders of Chile, Cuba, Jordan, South Korea, Qatar, the Phillippines and Morocco.

Iran's President Hassan Rouhani will also speak at the General Assembly on Tuesday, along with the leaders of France, South Africa, Egypt, Tajikistan, Mexico, Latvia, Lithuania, Indonesia and Peru.

The second day of the General Debate will open with the participation of the President of Bosnia and Herzegovina, followed by Uzbekistan, Kazakhstan, Mozambique, Iraq, Finland, Moldova, Lebanon, Kenya, Bolivia, Afghanistan and Venezuela, among others. Ukrainian President Volodymyr Zelenskyy's video message is scheduled to be played on Wednesday as well.

Thursday will begin with the remarks by the President of Niger, Albania and Cyprus. Yemen's President Abdrabbuh Mansur Hadi will also speak on this day, along with the leaders of Libya, Azerbaijan, Haiti, Zimbabwe, Haiti, Somalia and the Central African Republic.