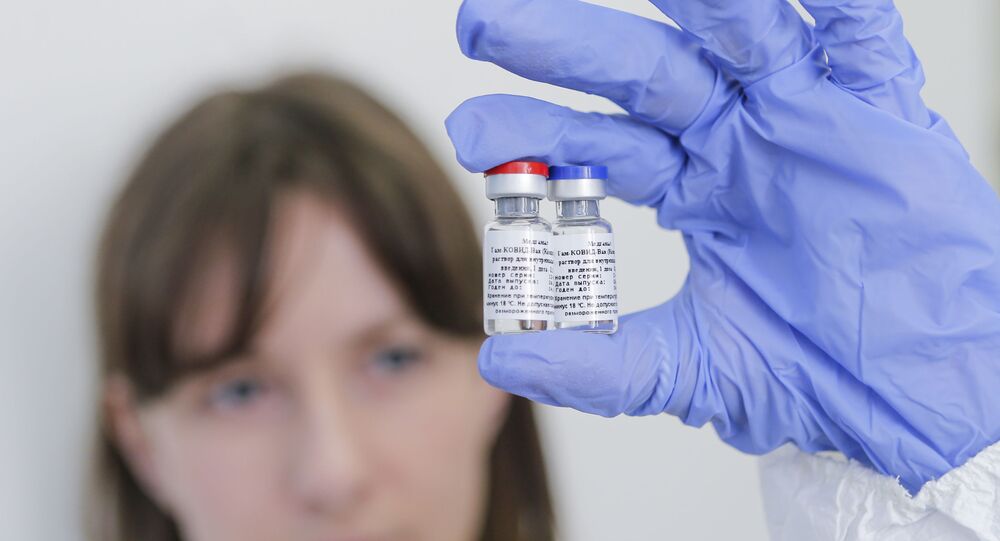 Kremlin: AstraZeneca Trial Halt Shows Importance of Having Package of Vaccines Like in Russia

Earlier in the day, AstraZeneca announced that the third round of its trials of an anti-COVID-19 vaccine has been paused following the “potentially unexplained illness” of a participant in the UK.

The suspension of AstraZeneca's coronavirus vaccine trials has shown the importance of having a package of vaccines like in Russia, the country's presidential spokesman, Dmitry Peskov, said on Wednesday.

"This situation repeatedly underlines the importance for every country to have several vaccines in its package. This ensures more reliable results of the trials," he said in response to a question as to whether Russia is concerned about its vaccine after the situation reported at AstraZeneca.

The Kremlin spokesman added that the vaccines were quite different: AstraZenca was based on a chimpanzee viral vector, while the Russian vaccine was based on a human one.

Peskov made this statement after AstraZeneca, a British-Swedish multinational pharmaceutical company, announced earlier in the day that it has halted the third round of trials of its coronavirus vaccine due to a "potentially unexplained illness" in one of the participants.

Russia objects to attempts to politicise development of the coronavirus vaccine, Peskov added.

"We have always seen in a negative light attempts to politicise and make political anything that is linked to testing and trials of the vaccine," Peskov told reporters.

Earlier in the day, Russian Health Minister Mikhail Murashko announced that the third phase of the post-registration clinical trials of the Russian vaccine had started. The first volunteers in Moscow have been vaccinated against the COVID-19 infection.

"We have gathered almost 31,000 people who want to participate, within just 10 days," Murashko told reporters.

Russia is now completing work on a new mobile application that would enable direct contact between patients and the vaccine developers, Murashko said, praising it as "the first experience of this kind in the world."

The minister added that data on potential adverse reactions to the Sputnik V vaccine will be put in a special document. According to Murashko, developers of the Russian vaccine are ready to make it available for people all over the globe.

Russia registered the world's first coronavirus vaccine on 11 August. Called Sputnik V, it was developed by the Gamaleya National Research Centre of Epidemiology and Microbiology and the Russian Direct Investment Fund (RDIF) after several rounds of clinical trials.

The country has already received requests for 1 billion doses of the vaccine from at least 20 countries.