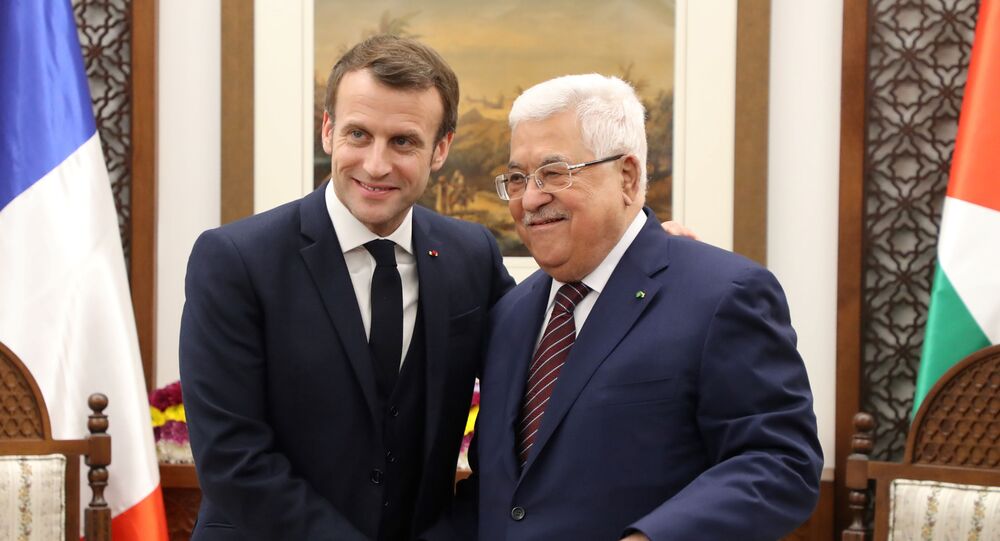 The bilateral deal was announced on Thursday and an agreement on the mutual establishment of embassies is expected to follow in the coming three weeks. As part of the deal with the UAE, Israel said it would halt its plans to formally annex parts of the West Bank claimed by Palestinians, although they have not been entirely scrapped. Abbas has denounced the deal, saying Palestine saw it as an act of aggression against its people.

According to the news agency, Macron expressed France's support for the deal, saying it will contribute to the peace process in the region. The French leader also stressed the need to reach a political solution in accordance with the two-state settlement and international law and reaffirmed that Paris rejected Israel's annexation plans.

The Palestinian leader, in turn, thanked Macron for his country's support. Commenting on the deal, Abbas explained the reasons for rejecting it.

"Regarding the tripartite agreement, President Abbas explained to the French President the reasons for rejecting it, stressing that neither the Emirates nor any other country has the right to speak on behalf of the Palestinian people, adding that in the event that any other Arab country takes a similar step, we will take the same position that we have taken towards the Emirates, and will not accept using the Palestinian cause as an excuse for normalization of relations or for any other reason," the state news agency said.

Later in the day, Macron expressed his determination to work on achieving peace in the Middle East.

"I talked to the President of the Palestinian Authority, Mahmoud Abbas. I told him about my commitment to work toward peace in the Middle East. The resumption of negotiations to reach a just solution consistent with international law remains a priority," Macron wrote on Twitter.

​Israeli Prime Minister Benjamin Netanyahu has promised to launch a large-scale annexation of Palestinian territories where Israeli settlements are located in the West Bank in early July, but the plan, which comes in line with US President Donald Trump's peace deal for the Middle East, was eventually postponed. Netanyahu's project has been condemned by members of the United Nations and the European Union.