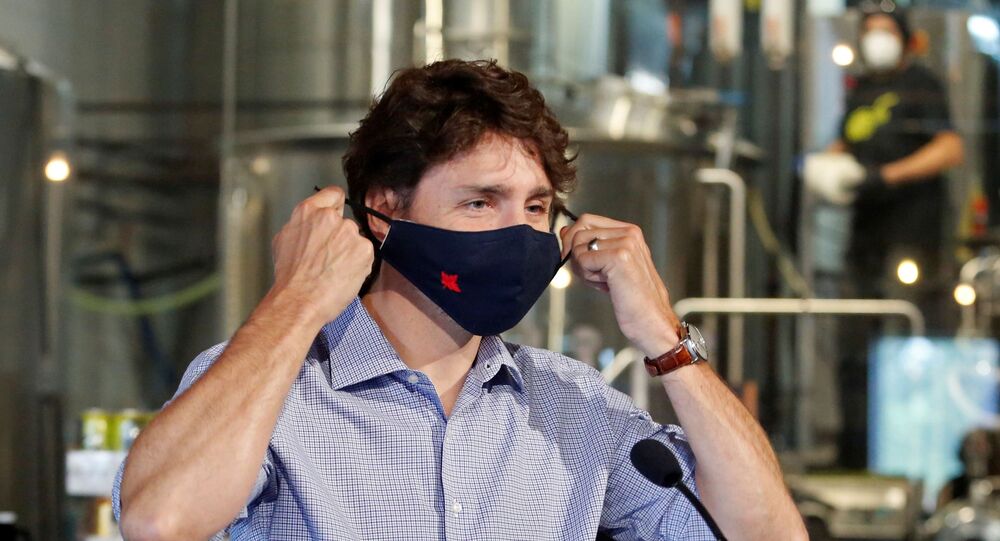 President Trump is hosting Mexican President Andres Manuel Lopez Obrador on Wednesday. However, much has been made of Canadian Prime Minister Justin Trudeau’s decision to skip the meeting, which was originally intended to be a celebration of the new trade agreement between the three countries, which came into force last week.

Part of the rationale in Canadian Prime Minister Justin Trudeau’s decision to skip Wednesday’s summit dedicated to celebrating the New Agreement Between the United States, Mexico and Canada (USMCA), may have been the bad optics for his carefully groomed image of fighter against the coronavirus, CNN has suggested.

“He would have likely been forgiven for skipping the handshake, but in declining an invitation to the White House, Justin Trudeau is sidestepping a minefield of Covid etiquette and politics. For starters, President Donald Trump and Mexican President Andres Manuel Lopez Obrador have refused to wear a mask in public. Trudeau doesn’t seem to leave home without one. And it’s no trivial thing, but insight into how each country is fighting the virus,” the network argued in a report.

“For Trudeau, it would have been like risking a lunch with neighbours you know aren’t taking the virus seriously,” CNN added.

Our nations are bound together by common values, shared love of freedom & deep devotion to faith & family. This visit will further deepen our strong friendship🇺🇸🇲🇽 pic.twitter.com/f4MeTj98i5

The network pointed to declining COVID-19 numbers in Canada amid a surge in new cases in the US, and polling showing that most Canadians want the US-Canada border to stay closed. At the same time, CNN praised the decision by a growing number of Canadian cities to make masks mandatory, and to contact trace (i.e. electronically surveil) would-be infections.

Last week, Trudeau told reporters that he was “concerned about the health situation and the coronavirus reality that is still hitting all three of our countries,” and promising to let Washington know “if that summit makes sense for us.” He added that recent US threat to impose new tariffs on Canadian aluminum and steel would weigh on his final decision.

Formally, the Prime Minister’s Office cited a scheduling conflict, releasing a statement Monday saying Trudeau “will be in Ottawa this week for scheduled cabinet meetings and the long-planned sitting of Parliament.” The PM’s day includes an economic update statement on Wednesday, preceded by a two day cabinet retreat.

The non-essential travel restrictions between the two countries are expected to last until at least July 21, but may be extended. Canada resumed travel with the European Union last week, with the bloc listing a total of 14 ‘safe’ counties. The US was not one of them.

Toronto Star columnist Susan Delacourt echoed CNN’s assessment of why Trudeau may have skipped the meeting with Trump, arguing that while “scheduling conflicts were offered as the main explanation for Canada’s no-show,” the biggest real reason was the “alarming resurgence of COVID-19 in Trump’s America, not to mention the lingering threat of another round of aluminum tariffs.”

Then there are Trudeau’s ties to Trump’s presumed 2020 rival Joe Biden. “The former vice-president to Barack Obama paid Canada a visit two years ago in which he pretty much declared Canada’s prime minister to be the carrier of Obama’s legacy in the world. Biden’s campaign chief, Jen O’Malley Dillon, has given advice to Trudeau’s Liberals and last year, Biden put Trudeau in one of his anti-Trump campaign ads,” The Star columnist recalled.

© REUTERS / Blair Gable
Canada’s Trudeau Slammed as ‘Hypocritical’ for Taking a Knee in Support for George Floyd Movement
Trump and Trudeau have had a rocky relationship ever since Trump’s election in 2016, with the two men repeatedly engaging in verbal spats. Before cancelling his attendance at the celebratory USMCA meeting this week, Trudeau was one of the leaders who urged Trump to postpone the G7 summit initially planned for June but since pushed back to September.

The USMCA treaty came into force on July 1, replacing the 1993 North American Free Trade Agreement, which President Trump repeatedly criticized as a ‘bad deal’ on the campaign trail. The new pact retains NAFTA’s list of products eligible for zero tariffs, but obligates Canada to provide expanded access to US dairy farmers. Over all, the US expects to gain 176,000 new jobs and $68.2 billion in GDP from the renegotiated pact.