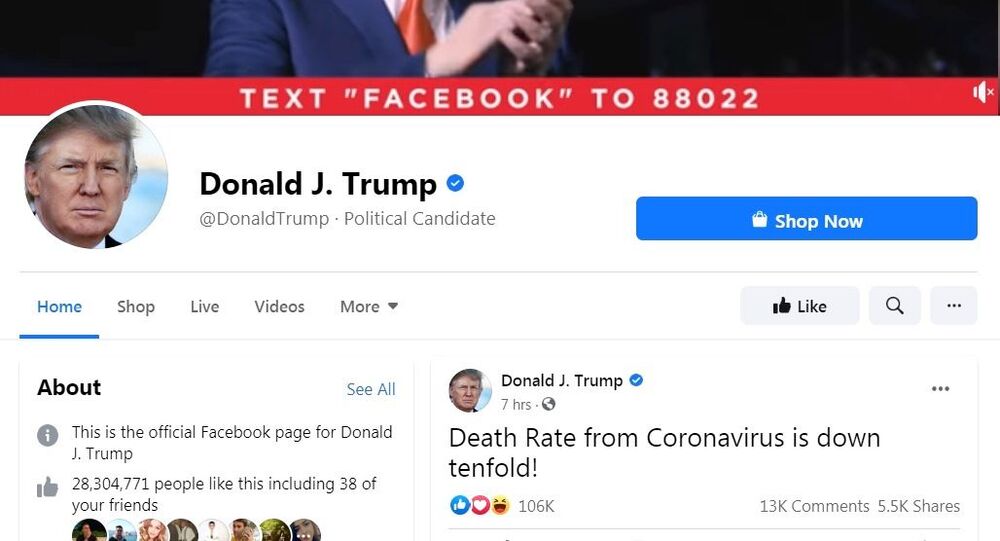 Facebook failed to remove three posts by the US President Donald Trump that “allowed the propagation of hate/violent speech and facilitated voter suppression,” causing concern among the civil rights community, a new report says.

A fresh audit of Facebook's policies and practices, commissioned by the world's largest social media platform itself in 2018, has on 8 July yielded results.

The Civil Rights Audit, led by Laura W. Murphy, a civil rights and civil liberties leader, among others, have analysed Facebook’s impact on civil rights and argued that the company needs to do more to suppress hate.

Facebook COO Sheryl Sandberg commented on the audit outcome in her blog post, listing some of the recommendations made by civil rights experts.

"Some of the starkest criticism is reserved for our decision not to remove recent posts by President Trump. In the auditors’ view, the emphasis we’ve placed on free expression has not been adequately balanced by the critical value of non-discrimination. The auditors also strongly disagree with our policy to not fact-check politicians, and believe that the end result means more voice for those in positions of power," Sadnberg said.

She added that Facebook was “in a better place today than we were two years ago” but admitted that there are no “quick fixes” to “a wide range of civil rights issues, including our policies against hate”.

According to the report, the auditors made it known to Facebook leadership they were alarmed by, and disagreed with, the giant’s decision that Mr. Trump’s posts did not violate its Community Standards.

“While these decisions were made ultimately at the highest level, we believe civil rights expertise was not sought and applied to the degree it should have been and the resulting decisions were devastating. Our fear was (and continues to be) that these decisions establish terrible precedent for others to emulate,” the authors of the report said.

The auditors argued that Facebook set a precedent for other users by “exempting politicians from fact-checking”.

"If politicians are free to mislead people about official voting methods (by labelling ballots illegal or making other misleading statements that go unchecked, for example) and are allowed to use not-so-subtle dog whistles with impunity to incite violence against groups advocating for racial justice, this does not bode well for the hostile voting environment that can be facilitated by Facebook in the United States,” the report said.

Among its recommendations for the social media giant, the auditors suggested Facebook should bringing more civil rights expertise in-house and stay consistent about its commitment to civil rights laws.

“In numerous legal filings, Facebook attempts to place itself beyond the reach of civil rights laws, claiming immunity under Section 230 of the Communications Decency Act,” the reports said.

The auditors also accused Facebook  of being “far too reluctant to adopt strong rules to limit misinformation and voter suppression.”

“Ironically, Facebook has no qualms about reining in speech by the proponents of the anti-vaccination movement, or limiting misinformation about COVID-19, but when it comes to voting… With less than five months before a presidential election, it confounds the Auditors as to why Facebook has failed to grasp the urgency of interpreting existing policies to make them effective against suppression and ensuring that their enforcement tools are as effective as Facebook’s Civil Rights Audit 10 possible.”

Commenting on the audit findings and recommendations, Sheryl Sandberg said that while Facebook “won’t make every change they call for, we will put more of their proposals into practice.”

The report has also marked the progress made by Facebook in several areas. The auditors recognised that Facebook will include a link that directs users to its Voting Information Center on all posts about voting, including those from politicians, in order to help them acquire accurate information. The company has also been recognised for its progress in banning ads that “are divisive and include fear-mongering statements”.