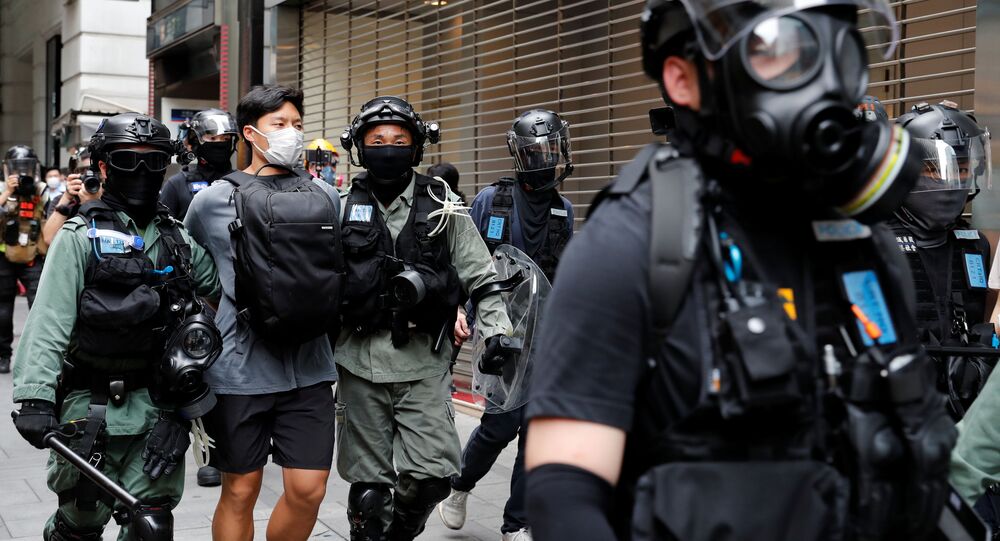 BEIJING (Sputnik) - Chinese Foreign Minister Wang Yi in a phone call with his UK counterpart has expressed hope that London will not meddle in Hong Kong’s affairs amid a national security legislation debate, the Foreign Ministry said on Tuesday.

"Hong Kong is exclusively concerned with China's domestic policy and is not subject to outside interference," Wang said in his call with Dominic Raab, as quoted by the ministry.

The UK, a permanent UN Security Council member, should lead the way in respecting principles of international relations and non-interference in internal affairs of other countries, the minister added.

Wang went on to note that Beijing has never interfered in the internal affairs of the UK.

"In the same way, the Chinese side hopes the UK to respect the constitution of the People's Republic of China and respect the legitimate right of China to protect state security on its territory," Wang said.

The minister argued that the national security legislation is necessary to bring to account a small number of radical supporters of Hong Kong’s independence and terrorists who pose a threat to national security. The call took place on Monday.

© AFP 2020 / Isaak Lawrence
China, US Will Kill ‘Goose That Lays Golden Eggs’ if Hong Kong Crisis Not Extinguished, Analysts Say
In May, the UK said that it sees the Chinese legislature’s intention to develop a national security law for Hong Kong as a violation of the 1984 Sino-British Joint Declaration on the city's high degree of autonomy.

Prime Minister Boris Johnson has since pledged to allow an eased path to immigration and UK citizenship for Hong Kongers holding British National Overseas passports if the central government imposes the legislation on the city.

The bill at the same time would ensure the rights and freedoms of Hong Kongers and let foreigners live peacefully in the autonomy, Wang stated.