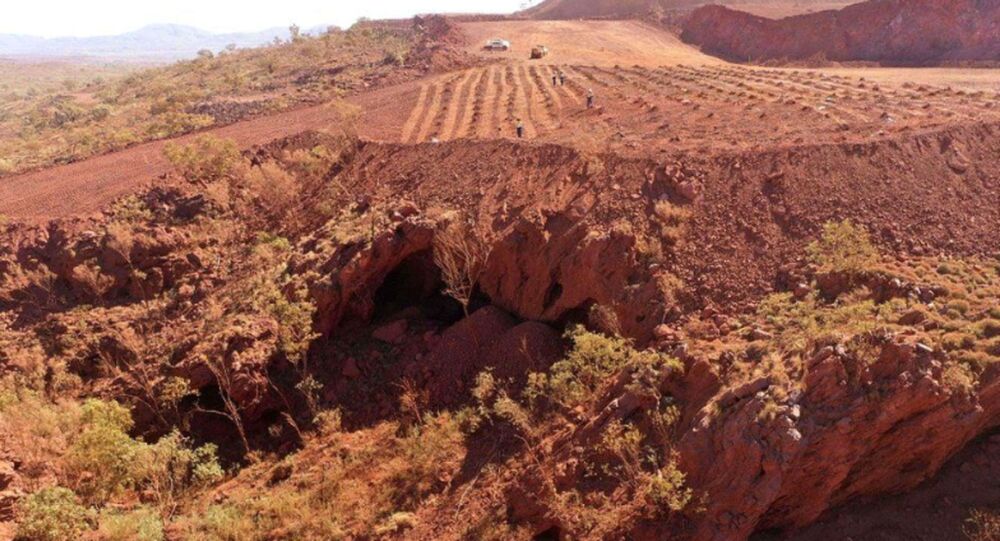 Multinational mining corporation Rio Tinto has apologized for destroying a 46,000-year-old sacred site belonging to local indigenous people in Australia in order to expand an iron mine.

The Juukan Gorge caves, located in the Pilbara region of the state of Western Australia, were blown up with dynamite on May 24 by Rio Tinto, one of the world's largest mining companies, as it expanded an iron mining project that was agreed upon with local authorities.

Many priceless prehistoric artifacts have been found at the now-destroyed remote Aborigines site. This resource-rich area of Australia featured two cave systems that contained items which indicated tens of thousands of years of continuous human occupation.

Among almost 7,000 relics discovered at the heritage site were artifacts such as grinding stones, a bone sharpened into a tool and 4,000-year-old belt made of braided human hair, reported the Australian Associated Press. An analysis of the belt showed a direct link between the Puutu Kunti Kurrama and Pinikura Aborigines and the prehistoric cave-dwellers going back 4,000 years.

In a written “Statement on Juukan Gorge,” Rio Tinto Iron Ore Chief Executive Chris Salisbury, said: “We pay our respects to the Puutu Kunti Kurrama and Pinikura People (PKKP), and we are sorry for the distress we have caused. Our relationship with the PKKP matters a lot to Rio Tinto, having worked together for many years.”

"Today we also recognize that a review is needed in relation to the management of heritage in Western Australia more broadly," added Salisbury.

John Ashburton, a PKKP representative, told Reuters that losing the site was a "devastating blow.”

"There are less than a handful of known Aboriginal sites in Australia that are as old as this one ... its importance cannot be underestimated,” he said.

"Our people are deeply troubled and saddened by the destruction of these rock shelters and are grieving the loss of connection to our ancestors as well as our land."

Rio Tinto is an Anglo-Australian multinational firm and the world's second-largest metals and mining corporation, behind BHP Billiton. The publicly traded corporation has vast operations in Australia, with the firm’s iron mines comprising most of its revenue. In addition to iron ore, the giant has additional mining interests in Australia, such as bauxite for aluminium, as well as diamonds and uranium. It received permission to expand its iron ore mining operations in 2013.