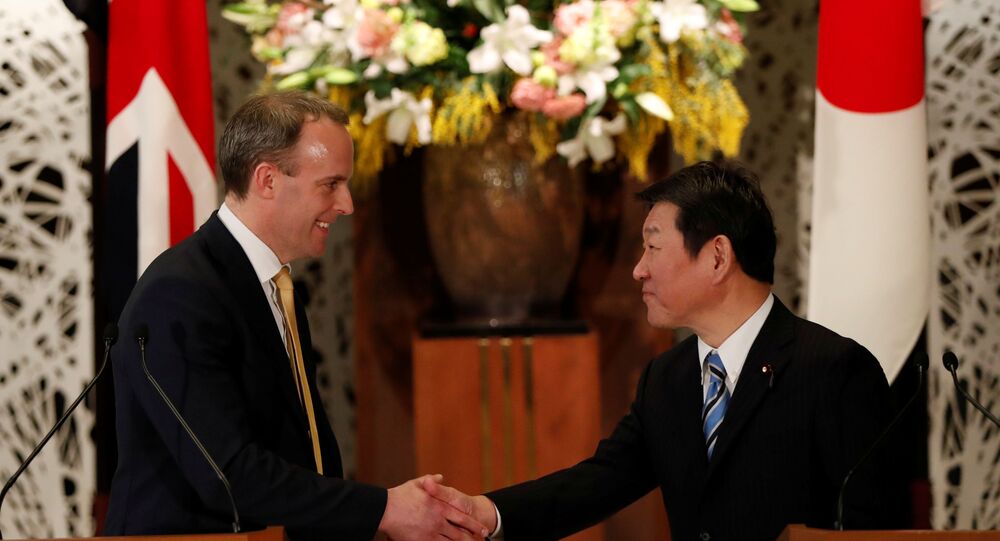 Dominic Raab began his pacific trade mission on Thursday, travelling to Australia, where he said the UK will be "energetic champions of free trade". His trip comes as the UK seeks early trade deals with Australia, New Zealand, Japan and the US after its departure from the EU in January.

Japanese and British diplomats have agreed on Saturday to initiate a bilateral trade deal that will be “at least as ambitious” as Japan’s current arrangement with the European Union.

Japan's Foreign Minister Toshimitsu Motegi and his British counterpart, Dominic Raab met for the first time in Tokyo after the United Kingdom formally withdrew from the bloc on 31 January.

“Preliminary discussions have begun in building a new bilateral economic partnership, and I hope we will be able to start and conclude negotiations as early as possible,” Motegi said at a joint news conference following the meeting.

Raab described the discussed deal as “at least as high standard, if not higher, and at least as ambitious” as the Japan-EU agreement which was established in February 2019.

This would “send a very powerful signal of our shared commitment to free and rules-based trade”, he added.

Motegi also gave his support to Britain's decision to become a signatory to the Comprehensive and Progressive Agreement for Trans-Pacific Partnership, an 11-member free trade pact which includes Australia, Canada, and Mexico.

He hailed Britain as an “indispensable partner” in realising a free and open Indo-Pacific, and they had agreed to a “two-plus-two” meeting alongside their countries’ respective defence chiefs.

The two also discussed regional security, agreeing to continue working for the complete denuclearisation of North Korea and to maintain sanctions on the country.

Tensions in the Middle East were also raised, with both agreeing on the importance of Iran remaining in the landmark 2015 nuclear deal which is intended to limit its nuclear program.

The conference comes as the UK minister embarks on a four-country tour of the Asia-Pacific region, having already visited Australia and is set to touch down in both Singapore and Malaysia.

The trip marks the beginning of Britain's quest to establish trade deals with Australia, Japan, New Zealand and the United States.

Boris Johnson's withdrawal agreement includes an 11 month-long transition period, during which the UK remains within the EU Customs Union and Single Market and looks to establish its own trade agreements with the rest of the world.

And Then There Were Five: Dominic Raab Eliminated From Tory Leadership Contest