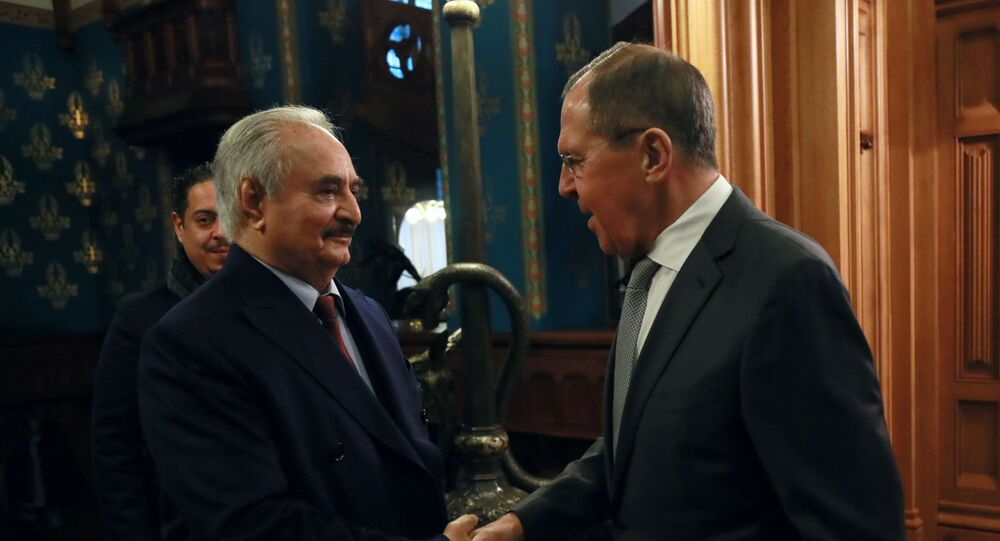 Talks began on Monday morning between Russia and Turkey’s foreign and defence ministers in the so-called "2+2" format. Afterwards, representatives from Russia and Turkey met with the GNA and LNA delegations separately. Negotiations went on for more than six hours and were closed to the media.

The Russian Foreign Ministry confirmed that Libyan National Army (LNA) leader Field Marshal Khalifa Haftar has left Moscow without signing a ceasefire agreement with the head of the UN-backed Government of National Accord (GNA) Fayez al-Sarraj.

The main issues of the talks were the parameters and the possibility of an armistice agreement being signed between the Government of National Accord's Fayez Sarraj and the head of the Libyan National Army, Marshal Khalifa Haftar.

In turn, the Libyan delegation of the Government of National Accord, headed by Prime Minister Fayez Sarraj, has left Moscow for Istanbul after signing the ceasefire agreement which their primary opponents, the Libyan National Army have yet to sign, GNA Foreign Minister Mohamed Taher Siala said.

"The delegation of the Presidential Council of the GNA and the High Council of State has left Moscow after signing [the ceasefire agreement], we are now in Istanbul," Siala said.

Siala also confirmed that Field Marshal Khalifa Haftar, the LNA commander, asked for additional time to study the document before signing it perhaps on Tuesday.

"Haftar asked for a delay till tomorrow and may sign [the ceasefire agreement] at the insistence of Russians," Siala explained.

Representatives from the LNA and GNA did not meet each other at the talks, according to Hamid al-Safi, the adviser to the speaker of Libya’s eastern-based parliament that supports Haftar’s LNA. The adviser stated that parliamentary speaker Aguila Saleh and Haftar met only with the Russian representatives, while al-Sarraj and Khaled al-Mishri, the head of the GNA High Council of State, met with both Turkish and Russian diplomats.

On Monday, Sarraj and Haftar met in the Russian capital for talks mediated by Russia and Turkey. Russian Foreign Minister Sergei Lavrov said that Haftar had asked for a little extra time to look at a draft ceasefire agreement between Libya’s conflicting sides.

On Sunday, LNA and GNA announced a ceasefire in the country, effectively halting the months-long LNA offensive to take the GNA-held capital of Tripoli. The ceasefire appears fragile as the sides have accused each other of violating the truce.