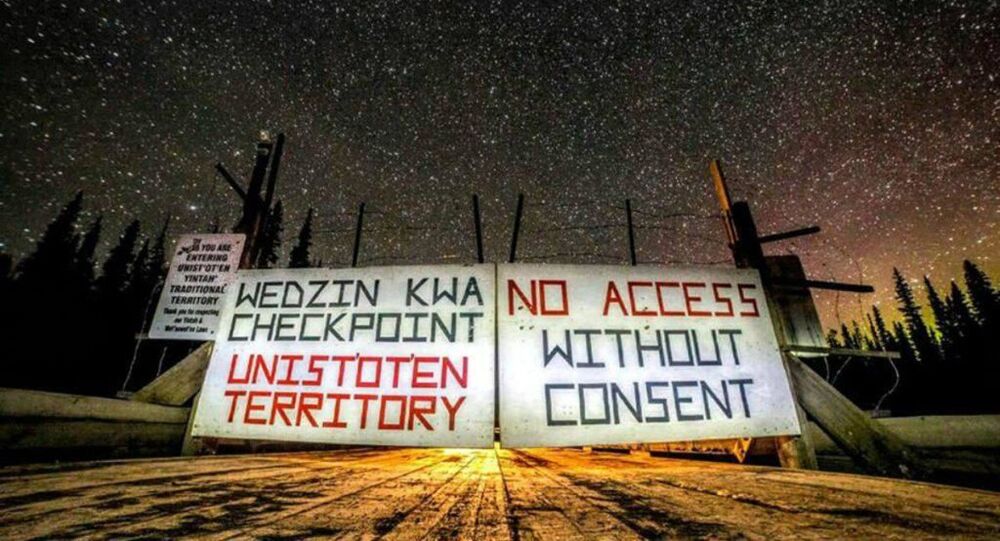 'All We Are is Collateral Damage': Canadian Indigenous Chief Says Betrayed by Politicians

TORONTO (Sputnik) - The willingness of the Canadian authorities to use lethal force against Indigenous activists protesting the construction of a natural gas pipeline on their ancestral lands in British Columbia represents a failure of the Trudeau government's reconciliation policy, a high-ranking hereditary chief said.

According to Wet'suwet'en Nation Hereditary Chief Na'Moks (John Risdale) of the Tsayu (Beaver) Clan, the interests of big business have recently discarded years of progress achieved in relations with Indigenous peoples and undermined environmental policy.

“They are trying to bulldoze us. They are bulldozing our graves, our sacred sites - for money,” Chief Na'Moks said referring to a raid by heavily armed Royal Canadian Mounted Police (RCMP) emergency teams on a Wet'suwet'en Nation protester camp blocking the construction of a natural gas pipeline in northern British Columbia.

On Friday, the Guardian published a report with RCMP strategy session notes that revealed the law enforcement agency was prepared to use "lethal overwatch" i.e. dispatch snipers to break up the protest.

Chief Na'Moks said the report was mostly true and he was not surprised by what it revealed because the police actions were premeditated.

The Wet'suwet'en Nation protesters have been adamant that they present no threat to Canada's national police.

“We made sure that there was nothing, not even hunting rifles available in that camp. We made sure not even a knife was available,” Chief Na’Moks said. “The only weapons that the ladies had were the drums and eagle feathers. … We did not want to be instigators.”

The RCMP also noted in its internal notes that there was no single threat indicating the protesters will use firearms.

Chief Na'Moks said the events of January 7, when heavily armed RCMP special operations teams broke down the gates of the Gidimt'en camp, will go down in Canadian history.

“Canada has never seen what we experienced. They were ready to shoot us. All we are is collateral damage,” he said.

When the protesters refused to give in to the Canadian government’s demands by citing Article 10 of the UN Declaration on the Rights of Indigenous Peoples, which stipulates that Indigenous peoples shall not be forcibly removed from their lands or territories, the RCMP moved in and arrested 14 protesters for contempt.

The charges were dropped in April after government attorneys and TC Energy agreed not to proceed with criminal or civil contempt proceedings against the protesters.

The RCMP issued a statement disputing the report and insisting some of the assertions where mischaracterizations of its practices. The RCMP also said they have not been able to view the documents cited in the original story.

“As such, we cannot verify the validity of the statements made in the article or of the documents themselves. Similarly, we have not had the opportunity to determine in what context any of the alleged statements may have been made or by whom,” the RCMP said.

The RCMP also addressed the issue of “lethal overwatch,” saying the term refers to the observatory position taken by officers to ensure safety.

"This term does not infer action other than observation," it said.

In addition, the RCMP said it will maintain a constabulary in the area as long as it is deemed necessary.

Chief Na’Moks termed RCMP’s operation as “wreck-conciliation,” a reference to the increasingly dysfunctional Indigenous reconciliation policy that the Trudeau government has sought to implement since it was first elected in 2015.

“[The government] wrecked it. This wonderful, wonderful relationship that we have built since 1997, they have flushed it down the drain for a dollar,” he said.

Chief Na'Moks referred to the landmark 1997 ruling by the Supreme Court of Canada in the Delgamuukw v. British Columbia case that reaffirmed Indigenous land claims and recognized hereditary chiefs.

The Supreme Court ruling was viewed by Indigenous groups as the first step toward reconciliation with the federal government.

The decision traces its roots back to 1984 when British Columbia allowed clear-cut logging to take place on the territory of the Gitxsan people without hereditary chiefs' permission.

The title of hereditary chief has been passed for at least a millennium, with future chiefs being groomed for the title since childbirth. Hereditary chiefs oversee the entire nation - 22,000 square kilometres in the case of the Wet'suwet'en Nation - while elected chiefs have responsibility only in certain villages and are part of a system imposed by European settlers.

On 18 June, Trudeau said during a press-conference to reapprove the Trans Mountain pipeline expansion that the Canadian government will launch a new phase of engagement with Indigenous peoples.

Trudeau floated the idea the Indigenous should own pipeline projects in part or in full as a way to break the impasse between First Nations and Canada’s energy sector.

Chief Na'Moks said he was not sold on the government’s new approach, noting that consultation on matters such as pipelines only involves elected chiefs who toe the line, while hereditary chiefs are removed from the process entirely.

He also expressed scepticism as to the source of funding various groups plan to use in the purchasing pipelines especially given that decision-making on such issues should not be industry-led.

The Indigenous peoples’ equity is their land, but also water and air, and groups participating in the purchase of pipelines are neglecting the basic human right to clean water, he said.

"The most valuable resource on the planet right now is water. And that's what they're willing to kill. Every human has to drink clean water. I can do without oil. But I cannot last a week without water," Chief Na'Moks said.

Top Canadian officials, including Trudeau, have skirted the issue on plans to use lethal force against the protesters, save for the New Democratic Party (NDP) leader Jagmeet Singh and Public Safety Ministry Bill Blair.

Singh said the militarization of police forces is a problem across Canada, and threatening families and "sterilizing" the protest site are not acceptable strategies for the national police force.

In addition, Taylor Bachrach - Member of Parliament for Skeena-Bulkley Valley, the federal jurisdiction where the Wet'suwet'en Nation is located - called on the Civilian Review and Complaints Commission to conduct an independent review of the RCMP's planning and actions related to January incidents and determine whether they were consistent with Canadian law enforcement standards.

Chief Na'Moks said he does not talk to Trudeau and noted that during his visit to Ottawa last year he refused a photo-op with the prime minister, condemning the request as insulting political opportunism.

Principles and Struggle for Survival

Ultimately, the issue is about principles, Chief Na’Moks said.

The Wet'suwet'en people go to extreme lengths to preserve the land, which has sustained them for thousands of years, and they can drink 90 per cent of the water, Na’Moks said. However, the very real worry is that that by the time industry is done with its projects that number will decline to between 20 per cent and 30 per cent, he added.

The chief pointed out that greed is the reason why special operations officers and snipers were called in to confront the Wet'suwet'en Nation, but neither greed nor coercive threats can crush his or the resolve of the people.

"We can only do what we can. Our resolve is what we have been taught for thousands of years. We can't run away, where are we going to run to? Na’Moks said, adding "we don't want more than what we have."

Na’Moks said the fight to preserve the Wet'suwet'en’s ancestral land as bigger than himself for the survival of the people is at stake. Saying "I tried" is not an excuse to tell one’s grandchildren, he added.