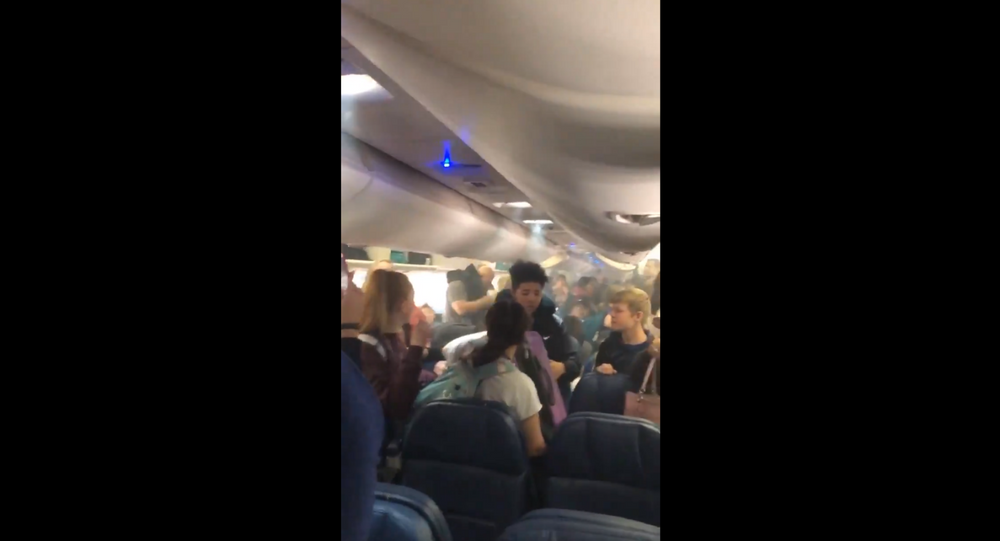 A New York City-bound Delta Air Lines flight from Madrid, Spain, was canceled Tuesday after the Boeing 767’s cabin began to fill with smoke moments before the aircraft was due to take off from Madrid-Barajas Adolfo Suárez Airport.

Video footage of the shocking incident, which was filmed and shared on social media by New Yorker Rocco Govas, shows dozens of travelers attempting to retrieve their belongings from the overhead cabins as flight staff are heard over the plane intercom ordering individuals to exit the craft.

​“The @delta plane got on fire in the back. There was smoke everywhere,” reads Govas’ tweet of the incident. “They waited to see what it was until they let us out of the plane.”

“I have not stopped coughing. Don’t understand why they didn’t let us get off the plane right away,” the frustrated traveler added.

​Speaking to Newsflare, Govas explained that smoke first erupted toward the back of the wide-body jet airliner before spreading to the front of the plane, and that the flight crew waited several minutes before evacuating the plane.

"The Delta crew told us to wait, then told us to get our stuff and 5 minutes later the captain said to leave everything behind and to leave the plane right away,” Govas stated, noting that it’s still unclear what exactly caused the smoke.

Although some individuals have been able to rebook their flight, Govas has not been so lucky. “I’m still in Madrid. … Some people are getting rebooked. Somehow I tried to get on another flight but they can’t do mine yet,” the New Yorker added.

The Delta incident came just one day after a Southwest Airlines flight was evacuated Monday at Illinois’ Chicago Midway International Airport after a battery charging system inside a passenger’s backpack overheated and caught fire.

No reports of injuries have surfaced from either the Delta or Southwest Airlines flights.